Thanks to hip-hop, another Rihanna is a certainty

My name is Crystal Smith and I'm an editor at TheLoop21.com. I was reading your blog and noticed you posted about Disney's The Princess and the Frog. I wrote a similar piece that discusses the need for more minority leads in children's programming. I thought you and your readers might be interested. 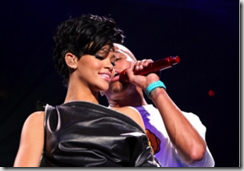 Images of black women in hip-hop culture make it more likely for them to be viewed as targets to be defaced and abused. History has proven it time and time again — women often get the short end of the stick. They weren't allowed to vote, they didn't have control over their reproductive or sexual health and were confined to the house.

Black women have had it even harder both legally, socially and even within the confines of their relationships with their husbands, boyfriends, brothers and fathers. Even as slaves, black women were subjected to the same beatings and work as their male counterparts, but were also raped and forced to breed children.

Today, black women like Rihanna are on the bottom of the social hierarchy, due to their race and gender. They make less, deal with more and are constantly bombarded with images of half-dressed, booty-shaking, loud-talking, over-sexed black females. Either images of black women are sprinkled into the whole, eradicated completely, or made to appear as though they deserve to be treated without respect.

These images objectify the black female body making it easier for men to abuse them.

Look at the world's inability to stop the systematic rape occurring in the Congo and Sudan. Look at Chris Brown's ability to beat up his even more famous girlfriend and the way the media violated her privacy and plastered her picture all over the Web. Look at the statistics.

In 2005, 1,181 women were murdered by an intimate partner. That's an average of three women every day.

Black women are 35 percent more likely to experience intimate partner violence than white women. In 2000, they made up 18.8 percent to 28 percent of all reported sexual assault victims, according to a report by the Justice Department, even though they represent only about 7 percent of the population.

In order to change the volume and frequency of abuse inflicted on black women, we've got to change the images about them. BET is rolling out new shows, hoping to stop perpetuating negative stereotypes, but what about the damage it and other media outlets have already done?

Rihanna's already been beaten. Malika Calhoun has already been kicked and slammed to the ground by the white deputy. Megan Williams was already held captive by six white racists and made to eat rat and human feces. HIV/AIDS is already an epidemic among black girls and women.
We want to talk about change, riding high on the euphoric feeling of having the first black president, but don't want to admit our involvement in the abuse and violence being inflicted on women.

Going back to Brown certainly shows Rihanna's miseducation, but her choice also points to the larger question: How can a woman have high self-esteem when the world's perception of who she is is constantly being degraded?
In survey conducted by the Boston Public Health Commission, 44 percent of teens said violence was a normal part of a relationship, and 46 percent said Rihanna was to blame for her treatment.

If that doesn't prove my point, I don't know what else can.

Love is Not Abuse