This Is A Cougar 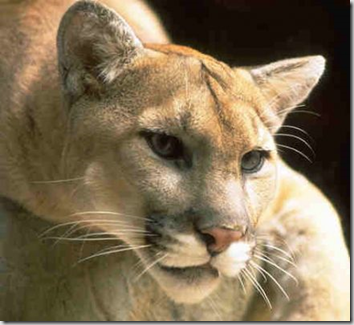 I am sick and tired of people referring women they deem to be older as cougars. In case you had not noticed it, a cougar is an ANIMAL and not a human being. Yes I am going totally speciest on this one.

Some women will be given the label cougar as early as 25, though I have most commonly seen it used to reference women who are 35 plus.  The idea behind this label is that after we reach a certain age we become conniving, desperate, manipulative creatures, in search of male boy flesh.   A cougar will do anything to sleep with a younger boyfriend and her self-esteem is strictly determined by her ability to sleep with younger men.

Some have tried to say that this label is positive because it makes room to consider that women can indeed engage in sexual conquest however, when we examine the negative undertones that accompany this label I fail to see how it can be deemed positive.

As men age they become “distinguished”.   When they decide to trade in their first wives for a younger model it is not considered predatory.   How many times have we heard the story of a woman supporting her husband through med school or law school, only to be unceremoniously dumped for arm candy as that is assumed part of the trappings of success?  We don’t have any pet names for this behaviour.

Judging and labelling is one of our favourite social pass times.  Often, when it comes to women it involves an element of sustaining our patriarchal understanding of gender roles.  To compare a woman to an animal because she is following her natural aging process, or because she actively seeks and enjoys sex is social discipline.  We have this idea that a good femininity is eternally young and submissive.  When women act in ways that are counter to this construction they are quickly stigmatized to maintain male privilege.

I cringe every time I hear a woman refer to another woman as a cougar.  By partaking in this social discipline we are setting the stage for other forms of sexism that are aimed at women to be legitimated.   It is an act of collusion.

When we over value beauty and or youth, we help support a social construct that will one day attack us all.   Many young pay lip service to ageism.  I have continually heard that the young are not taken seriously, or that their thoughts are not validated and yet the culture of youth is pervasive in this society.   To see a mature woman on an average night of television viewing is a rare thing.  The old quickly become invisible and this often translates into poverty and abuse.

We know that senior women are particularly vulnerable in nursing homes,  we also know that senior women who are single/widowed often live in poverty and yet this is ignored to deal with the angst of youth.  To be clear I am not comparing oppressions in terms of which is worse, I am simply saying that one form of oppression though quite prevalent is not a an active part in our social discussions.

It is the desperation associated with the word cougar that I find particularly repulsive.  This idea that someone is fighting a losing battle and desperately hanging on to a youth that we know to be fleeting.   Where is our celebration of those that are following life's path naturally?  When are we going to take the time to recognize that each crow foot, or wrinkle, is a testament to our struggles and our triumphs?  Not only is calling someone a cougar blatantly sexist, it is ageist.  Instead of normalizing this label we should focus on something that is more life and woman affirming; don’t we already have enough ways to shame women just to maintain an artificial difference?