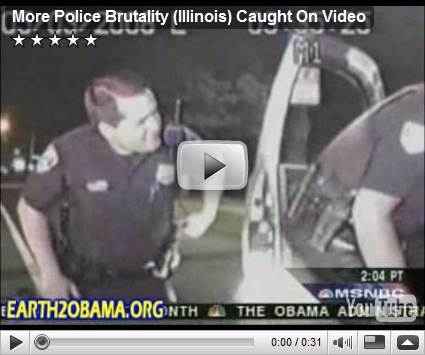 Smith, 29, and Suelter, 39, were each charged Wednesday with four counts of official misconduct and single counts of battery, mob action and aggravated battery in the alleged May 3, 2008, beating.   These officers of the law allegedly stomped on Scott 20 times because he was not subdued.

Notice how one of the officers appears to smiling as his brother in blue administers brutal kick after kick.   What is this but a gang style beating?  Scott was truly lucky to escape with his life.    As we know many who are brutalized by the police end up dead.

Beyond the video what was perhaps the most galling was the questioning as to why this case was brought to court in the first place by the attorneys of the defendants.

"Specifically, retaliation and revenge or retribution for the local union's decision to back a different candidate for election to state's attorney," said Voyles, who added that prosecutors have known about the squad car video since May.

While I understand that it is the job of the defence to poke holes in the prosecutions case, pretending that  charging an officer after brutalizing a citizen is a political act is beyond disgusting.

In recent months these incidents of brutality have become more public however,  this has been going on for decades with no real change occurring.  How long are we going to allow these men and women to act as judge, jury, and executioner?  We need to move beyond charging individual officers and recognize that the system is rotten.   Acting after the fact will not save lives, or build any trust between the community and police officers.   If the people charged with protecting us are indistinguishable from the so-called criminals clearly there is an issue that must be dealt with.