What’s A Little Sexism In The Name Of Prop 8? 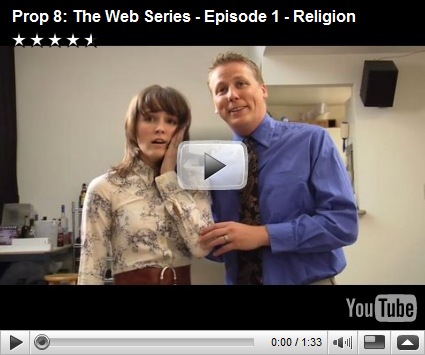 Okay we get it gays and lesbians want the right to marry.  You know what, I support this right however, what I cannot support is the gay and lesbian community continually playing on isms to achieve that right.  Hello…McFLy,  when you reaffirm an ism you only support your own oppression.

This little video seems like an innocuous send up about the role that religious fundamentalism has played in denying same sex marriage until we watch as two pseudo agents begin smacking around a woman.  You will notice that the woman was slapped three times while the man was slapped once.   Even if someone is saying the most vile things, no on has the right to resort to violence.  In a world where violence against women often leads to death showing a man slapping a woman not only supports but  promotes this kind of patriarchal oppression.

Slapping a woman cannot be used to make some kind ironic point ever.  Did the makers of this video even think about the lesbians that have been subjected to male violence and the ways in which this advertisement might have had a triggering effect?  What about their straight female allies that have worked hard to promote gay marriage? The GLBT community needs to stop acting as though the push for marriage trumps every other social issue.  Using people as tools to promote your rights is wrong and it is dismissive.