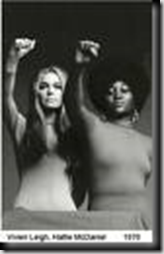 When we look at labels to describe activism by women we commonly use the term womanist, or feminist.  Words mean something despite how casually we toss them around.  They are how we order and understand our world.  In an effort to be inclusive when we write about activism many will often write feminists/womanists.  This acknowledges that some WOC have to some degree separated themselves and have taken on the label of womanists because of the history of racism within the feminist movement.

The problem with using these labels is that they often appear in a certain order.  Most will write feminists/womanists rather than womanists/feminists.  This may seem like a small insignificant point but what it does is that it once again sets up a hierarchy about what counts as real activism when it comes to women.  If feminism is routinely placed first it sets up womanism as a ridiculous offshoot.  When we consider that womanists largely identify as such because of racism in feminism, routinely placing it behind feminism only reaffirms the idea that white women still see WOC as secondary bodies.

Even though writing feminists/womanists is an attempt at inclusion, the order of the words appear means something because it speaks to who has power and privilege.  Often unconsciously we reaffirm power dynamics in our society.  Privileging certain bodies has become a naturalized phenomenon and  it takes a conscious effort to decolonize your mind. These small slights do not go unnoticed even if they are unremarked upon.

Many WOC are rightfully distrustful of white women.   There is a long history of betrayal and silencing.  I have watched time after time as we are assaulted and our issues ignored.  We are told that we focus to much on race in an attempt to destabilize our organizing.  Womanism  speaks about our lives, our needs and our existence in a way that feminism never has.  It validates our experiences and places us in the center of the conversation.  To place feminism before womanism  continually only reifies the need for womanism.

The rift between WOC and white women needs to be healed.  Each new slight just adds to the bitterness and contempt and is the equivalent of pouring salt into an open wound thereby further  dividing  us from each other.  When there is such a large history of betrayal we cannot afford to continue to fuel the negativity as it only detracts us from our common enemy: patriarchy.

WOC are always going to have issues that are unique to us, and yet we share many issues in common with white women.  The anger and bitterness often causes us to ignore their valid commentary and make sweeping assumptions.  There will never be one monolithic woman that can represent us and the “sisterhood” will never cure all the hurt, but we need to think about how we speak to each other if we are going to move forward.

Our future lies in unity and not in separation.  It is important that we leave room for forgiveness and  it is essential that white women acknowledge the ways in which they have wronged us.  This is a problem that we need to tackle together with patience and love.   Both WOC and white women essentially want to see women succeed, we just don’t always agree with what constitutes “woman”.