There has been much vitriol and race based attacks thrown at blacks since the failure of Prop 8.  I have since committed to proving through various examples that the black community is no more homophobic than other community.  Rather than seeking to work with those that have proven through thought and deed that we are strong allies to the LGBT community, we have been wrongly attacked.  As Julian Bond the chair of the NAACP speaks at the HRC dinner, it is important to note that he is simply one amongst many black leaders who have spoken strongly in favour of gay rights. 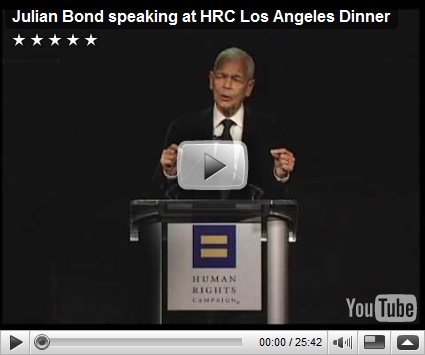 "When someone asks me, "are gay rights civil rights?" my answer is always, "Of course, they are." Civil rights are positive legal prerogatives: the right to equal treatment before the law. These are the rights shared by everyone.  There is no one in the United States who does not, or should not, enjoy or share in enjoying these rights.  Gay and lesbian rights are not special rights in any way. It isn't "special" to be free from discrimination. It is an ordinary, universal entitlement of citizenship."

Though she is no longer with us, Coretta Scott King had some words to say about gay rights that I think continue to be relevant to this day. 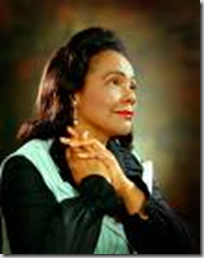 "Homophobia is like racism and anti-Semitism and other forms of bigotry in that it seeks to dehumanize a large group of people, to deny their humanity, their dignity and personhood. This sets the stage for further repression and violence that spread all too easily to victimize the next minority group. || We have a lot more work to do in our common struggle against bigotry and discrimination. I say "common struggle" because I believe very strongly that all forms of bigotry and discrimination are equally wrong and should be opposed by right-thinking Americans everywhere. Freedom from discrimination based on sexual orientation is surely a fundamental human right in any great democracy, as much as freedom from racial, religious, gender, or ethnic discrimination."

It is impossible to follow the words of Coretta Scott King and so I shall only say that her  impassioned speech still  resonates to this day.  We are a people who have known slavery, brutality and violence and we do not seek to oppress others in the same fashion.  There are those amongst us who refuse to acknowledge their heterosexual privilege however, just as you assert that racist gays do not represent the TLBG community in its entirety, homophobic blacks do not represent the vast majority of our community either.