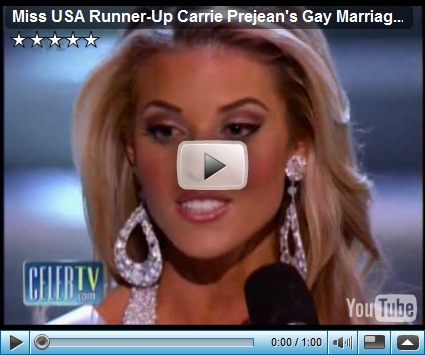 When asked by Perez Hilton what her feelings on gay marriage were, Ms. Prejeans issued the following response:

Well, it seems that  Ms. Prejean was raised to be a bigot.  If she thinks this absolves her of continuing to hold the same biases and beliefs then she is sadly mistaken.  As we grow and move beyond the sheltered world that our parents raise us with, we form our own sense of beliefs and values based on our own unique experiences.  What one thinks at ten will be different than one thinks at 18 or 21 not based solely on maturity but on exposure to new people and ideas.  The fact that she did not see fit to provide any basis for her beliefs other than this is what mommy and daddy says, reveals that she is not a critical thinker and is just another mindless automaton repeating hatred because it is simpler than acknowledging the undeserved privilege with which she currently lives.

Allowing two gay people to marry will not infringe upon her rights, rather it will confer rights to people that have historically been marginalized.  As she brazenly stood there telling a gay man that he did not have the right to be equal before the law, the smile on her face did not cover her ignorance and her hatred.  The cheers that she received for answer were even more galling.  That such bigotry could be rewarded publicly speaks to how far removed we are from truly valuing all bodies.