Corporal Punishments In Schools Is Alive And Well

Spanking is still accepted by many as a legitimate form of discipline despite the numerous studies that have been performed that prove how damaging this practice is.  I was terribly upset to read about  John C. Calhoun Elementary in Calhoun Hills, S.C., where principal David Nixon wields his paddle to keep the students in line.

Since instituting a 3 smack policy (or a “whippin” as referred to by Nixon) for infractions, there have been less behavioural issues as well as a leap in academic performance.  Seeing the results that this terrible policy has created has caused many to speak positively however, what they do not consider is that if children are performing it is fear based and not out respect or a desire to learn.  What happens when children become to old to be beaten into submission?  What lessons are the ultimately taking away from these incidents of abuse?

Many of these children are already growing in an environment in which violence is a daily event.  School should be the one place in which they have a harbour from the storm and instead they are subject to the same sort of violation because the administration has failed to find a way to  teach and or inspire without resorting to violence. 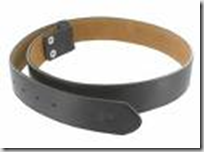 “Parents are given the option of spanking their child themselves; on rare occasions, they come to the school and use their own belts.”  One of the issues that Nixon complained about was the lack of parental interaction with the school however, providing an environment in which parents can feel justified in using a belt to discipline their children hardly constitutes encouraging an engaged parenting, rather it simply solidifies the idea that violence is the best way to solve problems and builds resentment in the mind of the child.

Though he has instituted rewards  like pizza for classes that do well and a fashion show, it is the spankings that are credited with the schools turn around and not the positive reinforcement.  I do believe that this speaks to the idea that we believe that children do not exist with the same right to be free of violence in the way that adults do.

Even though Nixon claims to believe in this policy his reservations about it clearly prove that on some level he realizes that what he doing is wrong.  He is quoted as stating, “If I could burn that paddle in my stove,I would. This is the worst part of my job. The best form of discipline," he says, "is praise”. Even though this article was to discuss the success of his spanking policy, he would not allow the paddle to be photographed.

Many people have a history of spankings as it was the most common form of discipline for generations and therefore feel that this is simply a part of childhood however, if they would  take the time to look back and reflect about how they felt as children when their bodies were being abused by a belt or a paddle, it should be enough for them to realize how harmful this practice is.  Simply because something has been socially accepted for a long period of time does not legitimate it as an appropriate form of action.  Shame on the school system for allowing this and shame on every single parent that does not sue this man for child abuse.