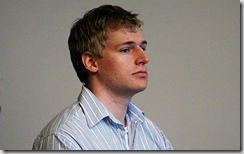 Philip Markoff went from a life of obscurity to national fame when he was arrested for murdering Julissa Brisman at a luxury hotel in Boston.  The media has been suggesting that he killed her to get money to pay off his gambling debts.  As the details become even more lurid, a daily feeding frenzy ensues to ensure that the public is aware of each minute detail of the case.

Markoff, being a white male and a medical student, was well on his way to a life of privilege.  In fact even without finishing his education, his race and his gender had already ensured that he had access to certain opportunities that are not universally available to all.

Even in this circumstance, his race and gender are already working to ensure that despite the fact that he was arrested for murder and for robbing a second woman - another masseuse who he met through the same classifieds website - at another Boston hotel, the spectre of innocence and disbelief surrounds him.

"He could not hurt a fly," she said in an e-mail to ABC's Good Morning America on Tuesday. "All I have to say is Philip is a beautiful person, inside and out."

Andrew Hookway who graduated from the same high school as Markoff  him stated:

“He always seemed normal. There was nothing out of the ordinary. “We lived down the street from each other and rode the bus to school,” he said.
If given the chance to speak to Markoff now, Hookway is not sure what he would say to him. “I hope it’s a setup or something,” he said. “Innocent until proven guilty,” Hookway added.

“Some people thought he was ‘rude and strange,’ Paulini said, “But those of us who knew him thought he was a decent guy. He was always joking around having a pretty good time with us. Sociable, smart.”

These are the kinds of sentiments regularly uttered when a white male of class privilege is arrested for some form of violence against women. The white male is not constructed as a threat or a criminal, such labels are reserved for males of color.  This of course is a function of whiteness.

Though Markoff is yet to be convicted, unlike so many men of color who daily interact with the criminal justice system the presumption of innocence actually applies to him.   Even if he is found guilty Markoff will never be understood as representative of his race; no his actions will be deemed an aberration as whiteness cannot afford to own such a taint.  White women will continue to grab their purses when they see young men of colour totally ignoring the threat that exists from white males.

The idea that one can be an individual is a privilege that belongs to whiteness.  This in part is why some find any discussion of whiteness as a systemic force so difficult to bear.  The concept of collective bodies is something that is relegated to people of color so that they can be constructed as less than.  Whether it is Markoff or Madoff, these men will only stand for their individual criminality whereas a black drug dealer will be the representative of his race.  People of color are often told that we focus to much on race and yet in almost every single interaction race is the invisible elephant in the room.  It is race that often determines how people are understood and in a world that is determined to pretend that we are not divided it functions to absolve some bodies and convict others.  Markoff may or may not be found guilty of murder but unlike whiteness at least he will stand trial.