Dora The Explorer Matters To Boys 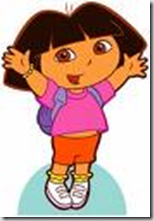 Dora has been a part of my life for the last 4 years.  We started a relationship when my oldest boy Destruction, developed a deep and abiding love for her.  Everyday at 5pm she promptly arrives on my television and I am ordered into silence for the next thirty minutes, unless I am shouting along, swiper no swiping, or singing the backpack song.  Mayhem who is 3 1/2  is equally dedicated to Dora.  We also watch her cousin Diego, but Dora remains their first love.

When the firestorm first broke about the fact that Dora is about to undergo an image change, feminists across the blogosphere wasted no time in documenting how damaging this would be to young girls.   Unlike many of the female targeted cartoons Dora is unique;  she goes on adventures, is not overly sexualized and is of color.  She unabashedly speaks her native language and encourages children to learn and experiment.  I must admit the little Spanish that I have picked up in the last few years is a direct result of the hours of Dora I have had to watch.

When I think of the shows I have been forced to watch like, Sponge Bob Square Pants, Bob The Builder, Fairly Odd Parents, Pokemon, Johnny Test  and yes even Barney; Dora stands as one of my favourites.

Just as Dora presents a positive image to young girls, she does so for boys as well and this has been ignored in the outrage over the image change.  When my boys watch and embrace Dora, they learn that masculinity is not the center of the universe even though so many things around them attempt to confirm this as a universal truth.   It further becomes apparent to them that girls don’t all want to play dress up and mommy; they want to have adventures as well.

If we want boys to grow and believe that girls are their equals, positive images of femininity  are extremely important.  When feminists write we constantly say that sexism hurts men to but often this is just lipservice and no real analysis emerges to explore this theme.  I waited patiently for someone to speak about Dora’s effect on boys but alas it was not to be.   It seems that femininity has completely claimed her and by so doing we have ignored the mass appeal she has to both boys and girls.

We know that gender is a constructed identity and therefore whatever images children internalize become their understanding of what roles males and females play.  If boys only see themselves represented they learn to see girls and women

as unimportant.  Even though Nickelodeon felt the need to create Diego to have a cartoon specifically aimed at boys, Dora continues to rule the roost at my house.  Having learned to love her from the very beginning my boys saw no need to slap a  figurative penis on her and switch allegiance to Diego and that speaks volumes about her ability to teach males that adventure comes in both genders.

When this new Dora makes her appearance in the fall, I fear that she will just affirm all of the negative stereotypes about girls and women I fight against each day.  When I tell the boys that not all girls like dolls, or makeup, Dora has always been able to serve as a ready marker of truth in my words. This new version will simply imply that as girls age they revert to what we have constructed as socially natural for femininity thus negating all the good work done by the original Dora.  So yeah, this new Dora sucks for boys as well.  Each time we challenge gender performance both sexes benefit.