Gay Marriage: If It Were Not For Those Pesky Blacks

Andrew Breitbart used his large platform at the Washington Post to once again spread the false meme that blacks are against gay marriage.

On display at the Miss USA event was the activist left's pageant of selective bullying, a concerted strategy to go after low-hanging fruit like Mormons. But the left leaves off its hit list members in good standing of its normal coalition - its "rainbow" coalition. In California, one of the gayest places on the map, blacks and Hispanics - who disproportionately disapprove of same-sex marriage - get a stunning pass from outraged proponents of gay marriage. 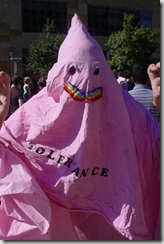 Isn’t it wonderful that despite the fact that this has been disproven countless times, the lie about the support of Blacks for prop 8 can continually get repeated as though it is the gospel truth?   Of course, it is only slandering an oppressed group so why not just allow this mendacity to continue to spread throughout our social discourse.

On this blog alone I have presented example after example of the black community standing behind same sex marriage.  Let us  not forget that there are black members of TLBG community, who I am quite sure did not vote against their own right to get married.

Each time I am forced to blog about this issue I feel as though I am beating a dead horse.  I cannot tell you how many times I have been told to let this go and just move on.  The point of fact is that this lie enrages me.  Many in the GLBT community refuse to acknowledge the racism engaged in after Prop 8, let alone apologize for it and yet they seek to construct all blacks as intolerant bigots.  Yes, it is the blacks with the least amount of institutional power that are denying the lesbian and gay community their right to marry.  That just makes so much sense.

The GLBT community does not want to admit that it is lead by whiteness and therefore uses its privilege to attack groups that it perceives as less than to affirm our social dissonance.  From gay is the new black, to appropriating images from Jim Crow, the white lead GLBT movement has made it patently clear that blackness exists to be oppressed.

I cannot stop speaking about this because to deny the racism in this position, is a denial of my dignity as a human being.   People need to stop engaging in privilege to prove that they are oppressed because more often than not it results in dehumanizing another vulnerable group in society.

Dear white GLB community, I know that you feel owed, entitled and wronged however your oppression does not out weigh that of another, nor does it give you the right to demean others at will. I hate to inform you that the differently abled, Indigenous Peoples, [email protected]’s, the poor, women, transgender community, Asians, and etc., are all still waiting for justice so get the fuck in line with everybody else. I know that this is painful to hear because many of you are so used to your white privilege paving the way to achieving everything your little hearts desire and this may be a little tough to take but take it from someone who negotiates three areas of oppression on a daily basis; the path forward is not to mimic your oppressor but to systematically change the ways in which we understand power and hierarchy.  The Master Tools are only going to alienate those who would have potentially allied with your cause.