I’m An Ally But 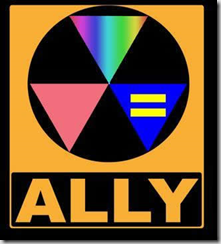 Many people take on the ally status because it is the cool leftist thing to do.   They announce to the world that they are for gay rights, trans rights, disability rights and are strongly anti racist.  Being able to own the label of ally comes with a responsibility that few are willing to openly acknowledge.  It is not enough to claim a belief in, or for something, one must actively seek to live your stated principles.

I spend a fair amount of time reading blogs from various positions because I want to learn.   One of the issues that I have with the feminist blogosphere is that though some have declared their beliefs boldly, the follow through is lacking.  May I ask, what the hell is the point of declaring yourself a trans ally is and then rarely to never writing about trans issues is?  Putting up the occasional link to Questioning Transphobia or TransGriot does not amount to doing your part to raise awareness when it comes to trans rights.

In terms of the LGB community, though I know that marriage is the major

organizing push, it is only one issue amongst many that must be dealt with.  To truly advocate on behalf of LGB peoples one should discuss employment, discrimination, education, gay bashing, etc., being a one trick pony does not display any kind of real understanding of the way in which our heterosexist society expresses its hatred of gays, lesbians, and bisexuals.  Oh BTW, if in your writings you turn the B into a silent letter, you are just as blind and heterosexist as the haters you claim to fighting against.

Waiting for a racial incident to occur before you choose to write about race, means that you don’t understand the ways in which racism effects the lives of POC on a daily basis.  To us negotiating racism is not a “special event”,  it is every damn day of our lives.   From the minute we leave the safety of our homes whiteness uses power coercively against us to maintain its privilege.

allegiance to.  Wearing the right assortment of coloured bracelets or ribbons does not constitute activism.  Sitting in a coffee house expounding on the lightness of being, while you quote esoteric quotes to prove how in touch you are with the downtrodden is the equivalent of a hot breeze on a hot day; annoying and needless.

Being an ally comes at a cost.  Though you will never truly know what it is like to live in the body of the oppressed individual, to some extent you will inherit their haters.   It means having to tell friends, family and co-workers to stop when they say something inappropriate.  It means not turning a blind eye when you see privilege in action because it is inconvenient for you to say something.  Every single day of your life, you must commit yourself to the cause of justice because you truly believe in the equality of all beings. Ally and the word but do not go together.

I am truly sick and tired of the lipservice given to intersectionality.  This is not some cool word that you can toss around.   Either you are committed to looking at issues from various angles or you aren’t.  How about a little honesty? Just admit that you are so damn privileged that you don’t really give a shit about the way that isms work together.   It is frustrating to have to take the time to weed through those that really care and those that claim to care.  Don’t freedom fighters have enough to do without dealing with false friends on top of it all?  Do the world a favour, since we already know that many just don’t want to own their privilege in the first place; just admit that you love being one of the “chosen”  and allow those of us that are committed to change to get on with it.

These are trying times and real lives are at stake.   If you are going to take on the label of ally all that I ask is that you mean it.  I know you want to hang on to your trendy leftist card but if you are really not up to the challenge, I appeal to your basic sense of humanity and humbly request that you stop getting in the way of progress.   Omission is just as much a sign of privilege as standing on the corner screaming epithets, it just takes a little longer to recognize.

Editors Note: Thanks to Allison McCarthy for the conversation that inspired this post