Judge Mathis: Prison Rape Is Part Of The Game 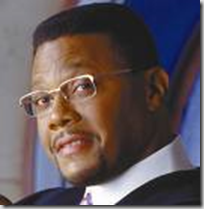 Judge Mathis has become a household name since the release of his autobiography "Inner City Miracle." In the book co-written by Blair Walker, Mathis speaks about growing up in the inner city and his membership in a gang.   From this horrible beginning he rose to become the youngest judge ever in state of Michigan.   He can be seen regularly on television dishing out his special brand of justice on the Judge Mathis show.

On several occasions I have watched his show only to notice the various times he engages in sexism and classism to push his pull yourself up by the bootstraps ideology.  While Mathis embodies the conservative dream come true, he is not afraid to send harmful messages in an effort to prove that everyone can achieve positive mobility if they just follow his leadership.

His latest attempt at corralling the “little people” is a new video game entitled, Street Judge.

"The main difference between our game and Grand Theft Auto is that players will have to deal with the justice system and consequences for their actions," explains Mathis. "When you go to prison, you gain credibility when you come back on the streets. On the other hand, when you go to prison you can also be raped. So take your chances. We may see young people who make the wrong choice and go to prison and are assaulted repeatedly (in this game)."

Where to even begin with this misadventure.  The idea that rape should be included as part of entertainment is distasteful to say the least.  Yes, prison rape occurs but it is something that we should be fighting against not normalizing as part of the penal experience.  Telling people that if you go to prison that part of your punishment is rape turns the victim in the guilty party.  No matter what heinous crime someone has committed rape should never be justified as part of the punishment.

I wonder if Mathis thought for a moment about how the image of repeated rape as part of entertainment would trigger and effect victims?

“The game will supposedly give gamers "the choice between good and bad through in-game video sequences and narration, [and] the Judge will be the source of reason for gamers."

What does this teach us but that we are responsible for our own assaults.  Does society not do enough victim blaming, without setting up a game which teaches that if you make the “right decisions” you can avoid rape?   I shudder to think of the young girls playing this game whose behaviour is already disciplined, once again learning that their safety is dependent upon choices that they make and not a society that is committed to declaring unequivocally that sexual violence is unacceptable.

When the Attorney General of Alaska can state, “If a guy can’t rape his wife…who’s he gonna rape?”   How can there be any doubt that we live in a rape culture.

Not every thing is fit for entertainment.  Mathis is attempting to teach that there are alternatives to crime and yet in the game, the punishment for not performing is a crime. How did he miss the irony of that one?  No matter where a person is, it is not legal to violate their physical person by assaulting  them.  Rape is not about punishing someone rape is about expressing power over another individual.

People will consume this game and talk about the message that crime does not pay without ever realizing that it reinforces the rape culture that we currently live in.   Whether it in movies, video games, books or magazine daily we are shown images of rape that minimize the damage that it causes.  It is continually justified as humour, or legitimated as a response to the behaviour of the victim seldom is the blame ever placed upon the rapist.  If Mathis really wanted to teach about crime perhaps he should start with the premise that it is never the fault of the victim and that there is never any justification for rape.