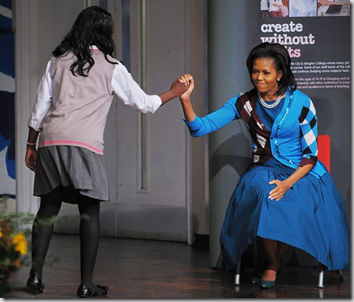 I have made no secret of the fact that I am huge Michelle Obama fan.  There are precious few examples of black women leading public lives that have the grace, strength and beauty of Michelle Obama.   I watched with rising anger as she was attacked continually throughout the campaign and those that claimed to be feminist in the mainstream media had precious little to say in her defence.   They were quicker to defend that colluding betrayer Sarah Palin than Michelle Obama. Not only is Michelle better educated than Palin, I am quite sure if you asked her, she could list the magazines or books that she reads.

She has been called an angry, unpatriotic, and even uppity, yet there has been a wall of silence instead of a rousing defence.  When she announced that she was going to be “mom in chief”, the wolves howled at the moon questioning what kind of modern example she represented by “standing behind her man”.  What people forget is that Michelle’s labour supported the Obama family while Barack pursued his dreams.  Without her income, he never would have been able to  work as a community organizer and in fact this is the first time in their marriage that he has earned more than her.  When we consider that many women continue to be economically dependent on men, Michelle stands as an example of a woman that is not only capable of having a successful career, but managing a family as well.  Barack was absent quite often for the last two years and it was Michelle who took on the burden of raising their daughters.

Yes ,Michelle left paid employment when her husband became president of the United States but she is still working.   There is no possible way that she could fulfill the duties foisted upon her as first lady and maintain paid employment.  We simply choose to purposefully not view what she does as work because we believe that  the support staff work that women engage in is a function of our so -called desire to nurture.   It is this attitude that helps to maintain the economic divide between men and women.

Michelle Obama is a remarkable woman.   She has stood bravely in the face of her critics and continued to be a wonderful example to not only WOC but all women.  As the media that once denigrated her begins to gush as her approval ratings rise, I cannot help but think about what fickle friends they have been throughout this journey.  The same people that refused to stand in her defence now rush to claim her, comparing her to Jackie O and Princess Diana. Somehow this is perceived as showing deference, or even a form of appreciation for the woman that she is.   It is enough to make me ill.  Michelle is not uplifted because the media has chosen to wrongly compare her to two white women born into privilege.  Her style and her grace are her own and she does not need to be legitimated by white femininity.

Even in their comparisons to Jackie O and Princess Diana, they cannot see their racism.   White women have always been held up as the standard of femininity and to pronounce Michelle a success in this vein means that they are still not recognizing her as a successful black woman.  As long as white women continue to be standard that all women are judged by, WOC will continue to play secondary roles no matter what our achievements may be.  It’s like saying that she is worthy because she embodies qualities that have typically been associated with white womanhood and  not because of being authentically and wonderfully a black woman.  You cannot claim her in times of convenience. She never has been, or ever will be yours to own.