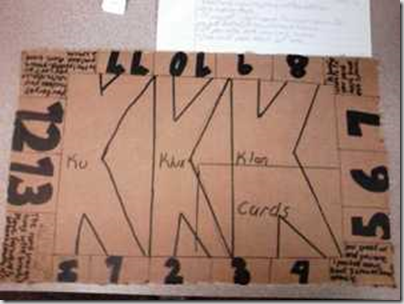 This board game was created by an Andover Middle School student as project on research assignment about historical figures.  The board game was on display at a school open house when a parent became offended and reported the school to the local NAACP.

According to the Witcha Eagle:

Terica Davis, who is African-American and has a child attending the school, saw the game displayed at a recent open house and took photos of it.

Davis objected to the game, saying it was offensive.

Among the game captions: "You forget to clean your white robe so you can't go to the lynching. You are punished. Move back two spaces."

Schools are responsible to provide a hostile free learning environment for all students to create an environment that is conducive to learning.  It is a sign of undeserved white privilege that it took a black parent to point out why displaying this project was not only offensive but harmful.

Incidents like this are exactly why parents of color need to be hyper vigilante about what ideas  schools are teaching our children.  It can be as simple as textbooks that have no positive images of children as color, to as blatantly obvious as game that constructs the terrorist activities of the KKK as a game.

As parents we need to be highly aware of what schools actually do.  They are more than a place that we send children to learn the three r’s, they also function to instil social mores and therefore; one of the largest lessons children learn is to conform.   When we consider that many of the ideas that we consider normative are necessarily racist, classist, homophobic, sexist, abelist and ageist the lessons that children learn in education system can at times be counter to an equal society.

Children absorb not only what they are shown directly, but by examples they are not given.   If a child only sees white characters when they are flipping through their text book it will encourage them to privilege whiteness and see it as the norm.   If the only time they see POC  is in “ethnic situations” and “clothing”, it further serves to create POC as exotic others who have no roll in mainstream life.

The ideas we have about race don’t occur magically, we purposefully construct them and actively pass them on to our children.   Any parent committed to teaching their child critical anti-racist theory must fight against all the agents of socialization that attempt to mold our children into believing and supporting our dissonance in worth and value.  We cannot afford to blindly send our children to school and assume that will learn that all people will be respected when those that teach them are steeped in the same racist ideology that has become pervasive in our culture.

Teachers that have chosen to challenge ideas about race, gender, sexuality and class have faced harsh criticism.  Many have lost their jobs for daring to believe that their students deserve to be taught to think critically about the world around them.  If we discipline teachers for teaching equality how can we possible expect the education system to reaffirm this value with our kids? Unpacking privilege means more than sending our child to an integrated school and living on a wish and a prayer.  The education system must be held accountable for the messages that it chooses to enforce if we are ever to break the stranglehold that racism has on our society.