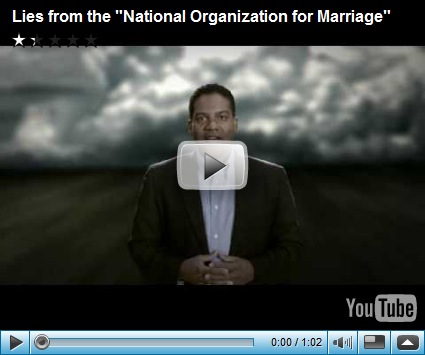 Transcript: “There’s a storm gathering.  The clouds are dark and the winds are strong and I am afraid.  Some who advocate for same sex marriage have taken the issue far beyond same sex couples. They want to bring the issue into my life. My freedom will be taken away.  I’m a California doctor who must choose between my faith and my job.  I’m part of a New Jersey church group because we can’t support same sex marriage.  I’m a Massachusetts parent helpless watching public schools teach my son that gay marriage is okay.  Some who advocate same sex marriage have not been content with same sex couples living as they wish.  Those advocates want to change the way I live.  I will have no choice.  The storm is coming.  But we have hope, a rainbow coalition of people of every creed and color are coming together in love to protect marriage.  Paid for by National Organization for Marriage which is responsible for the content of this ad.”

Oh dear the sky is falling, did someone inform chicken little?  Can you believe teh gays want to end heterosexist privilege?   Look how the sun has stopped shining and clouds are moving in.   If everyone one is equal how will we express power over one another?  We simply cannot have that and therefore the National Organization for Marriage plans on running these ads on CNN, the Fox News Channel, and MSNBC in the coming days.

I understand that advertising revenues are down with the economy in recession depression but to stoop to such mendacious nonsense is disgusting.  These so-called “concerned people” are paid actors..It seems they’re not afraid to pitch their bigotry and hatred but they certainly don’t want to be connected with it to the degree that their faces and personal identities are associated with it.

HRC spokesperson Brad Luna lets them have it:

What’s next for the National Organization for Marriage? Will they hire legendary infomercial pitchman Ron Popeil to hawk their phony agenda? This ad is full of outrageous falsehoods—and they don’t even come out of the mouths of real people.

In my experience if you cannot stand behind your own words, on some level you have already acknowledged that, that which you are advocating is fundamentally wrong.   On some level most advertising is deceptive as it is meant to inspire us to purchase that which we seldom really need however, to start from the premise of outright falsehood to promote intolerance is completely unacceptable and counter to a free society.  What knucklehead in charge of advertising decided that it would be okay to promote this kind of hatred by presenting it to the light of day?

For four years same sex marriage has been legal in Canada and somehow we have survived.   The clouds did not descend, the timmy did not stop percolating and lacrosse remained our national game even though hockey continues to be more popular. 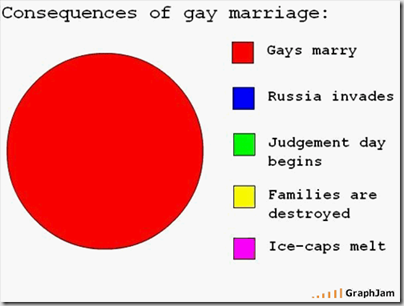 That’s right people the only consequence of legalizing gay marriage has been that gays and lesbians are allowed to get married.   They now have the right to have their unions recognized by the state and since we already know that 2 our of three heterosexual marriages end in divorce they can share the miseries of splitting up and dividing property to.  Bottom line is this, denying others their rights does  not protect yours, what it does is create a society in which everyone is less free.