In his original rant on his blog regarding Carrie Prejean stating that she was against gay marriage Perez Hilton decided that it was acceptable to call her a bitch.  In what I thought was a moment of humanity for him he apologized, only to quickly retract  it and add to his commentary. 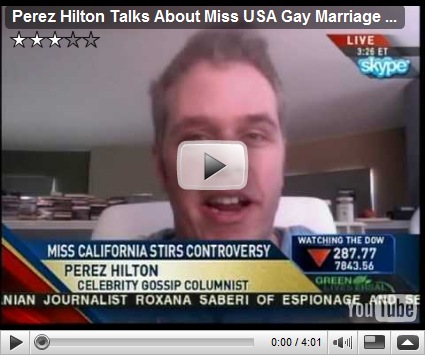 Yes I said the B word and uh and I was very angry.  You know what I don’t apologize.  I apologized yesterday ‘cause I was upset and angry and uh I thought I may have been to much in the moment but over  the course of the last twenty-four hours, the more I’ve thought about it; you know what I’m gonna stand by what I said just like she said.  You know what, I called her the B word but hey I was thinking the c word.  I didn’t say it.

Well, where to begin with Mr.Hilton.  They call him the Queen of mean  and I do believe that the moniker is fitting.  I do not read his blog because he has a penchant for demeaning women, including referring to cisgender women as trannys (the man is an equal opportunity offender) .

When I wrote the post about gay white males still having privilege, I  received a ton of backlash but I do believe that Hiltons commentary reifies my point.  There is this idea that gay males are the natural allies to womanist/feminists because they exist as marginalized bodies but in truth despite dealing with an area of oppression, they are still able to wield and express patriarchal power.

Hilton wants the world to be upset because Ms. Prejean had the nerve to aim her heterosexual privilege directly at him.   While what she said was absolutely offensive, his commentary was no less so.   Calling women bitches and inferring that they are cunts is demeaning.  Homophobia not only restricts the rights of white gay males, it also restricts the right of ALL LESBIANS, and BISEXUAL women.  That’s right, there are women in the GLBT community and when you refer to one as a bitch or a cunt you are demeaning your supposed allies.

No matter how many times the point is made about the interconnectivity of the isms, invariably there are those that feel that the best way to resist their oppressor is to engage in oppressive behaviour themselves.  Screaming about the ways in which you are “othered” and then engaging in the same behaviour only supports the idea that attacking others based in perceived difference is acceptable.

As Monica of Transgriot is fond of saying, “the LGBT community is nothing more than a microcosm of the larger society” and this means that certain members will continually ignore the privileges that they have to display sexism, racism, ableism, etc.; the issue is that this is rarely to never acknowledged in the effort to present themselves as the last remaining bastion of oppressed peoples.  When you ignore intersectionality, you alienate not only members of your own group but those that would stand in your defence.  Each time an incident like this happens, it makes it that much harder for an ally to speak out in favour of gay rights because the groups that we approach ask why we see this as an issue when there are so many vocal members within the GLBT community that dehumanize others.

These exchanges are about power.   I have repeatedly stated that our concept of power needs to be change if we are to move forward.  There are many different approaches that Hilton could have taken with this issue that would have been affirming.  He could have simply have condemned her position, he even could have pointed out weaknesses in her argument but he chose to rely on mindless sexism because he has been so steeped in misogynistic hatred of women that viewing one as an equal is beyond his capacity. He may not find women sexually appealing but that does not mean that we are not worthy of respect.

His vitriol was so dehumanizing, I wonder whether he was really upset by the display of heterosexual privilege or the fact that it was a woman telling him that he was not equal.  When men are used to being in the default position of authority, it can be emasculating to discover that there are occasions when women are able to wield power just as coercively as patriarchy.  The fact that this exchange was so public further adds an element of shame to the whole event.

Neither the statements by Ms. Prejean or the resulting commentary by Hilton will go down as their finest moments.  They are both more of an example of how not to behave or think than anything else.   Hilton has used this incident to score some cheap publicity for himself thus causing me to question how real his outrage is. He has not focused on the issue of gay marriage and why this important to the gay and lesbian community, rather it has become just another platform for him to promote his virulent hatred of women that he regularly displays on the rag he calls a blog.  Hilton is not interested in justice or equality, he is interested in power and no amount of mock rage on his part is going to make his vitriolic rantings into a plea for social justice.

In the above commentary I do believe that Hilton makes it more than clear that his privilege should trump hers.