A Royal Hug Or Royal Racism? For the last few days the media has been obsessed with the question as to whether or not Michelle Obama broke royal protocol by daring to return an embrace initiated by the Queen.   Let’s be clear, despite the nonsense about the divine right to rule, the Queen puts her panties on one leg at a time just like every other woman.  While I respect British traditions the idea that someone is magically elevated by an accident of birth to me seems not only highly archaic but somewhat ridiculous.

From watching Michelle interact with dignitaries what is clear is that artifice and falseness are not natural to her.   This was simply a moment shared by two women that the media and certain members of the aristocracy have managed to fixate on to the negation of what I feel to be a far more grievous action by Prince Philip. 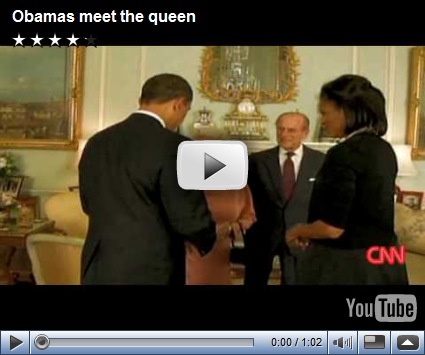 The following is from Sky News:

It had to happen. When President Obama and wife Michelle met the Queen at Buckingham Palace, a Prince Philip gaffe was inevitable.

In the small talk when they first met, the Queen and the Prince were sympathising with the President and his wife about their gruelling schedule since arriving late on Tuesday evening.

"The time lag," said the Queen, ever the diplomat.

"You're just trying to stay awake!" said Philip, ever the foot-in-mouth blunderer.

Then the President told the Royals: "I had breakfast with the Prime Minister, I had meetings with the Chinese, the Russians, David Cameron...

"And I'm proud to say I did not nod off in one of the meetings."

A guffawing Prince Philip then blurted out: "Can you tell the difference between them?"

Now at first I thought that was an insult to David Cameron. But perhaps not. I may be wrong. Perhaps it was a compliment for the Tory leader to be compared to two powerful world leaders.

Either way, it was vintage Prince Philip!

It would seem to me that  considering his position, the statements of Prince Philip were far more egregious then any breach in royal protocol that occurred when Michelle Obama hugged the Queen.  He was clearly continuing on with  the tradition of royal racism that they have shamelessly displayed to the world.  It is particularly telling that the media felt no need to create a sensation over this event.  Philip is deemed “old world” and therefore, his racism is continually excused.  Regardless of how old this man is, if he is going to represent a country such behaviour is unacceptable.

This is not just some sort of verbal blunder.  The royal family have continually made racist statements publicly.   When we consider the fact that their positions are based in an accident of birth wherein a society has falsely chosen to privilege certain bodies,   it reveals exactly how far we are willing to extend white privilege and hierarchy.   Philip is not some sweet doting old man, he had to know that his commentary to the first African American president and first lady were completely unacceptable; the point was that he did not care.

Elites like Philip can afford not to care about the damage that their actions or statements cause.  At worst they will receive a small slap on the wrist, while the POC is left to deal with the shame and humiliation of being reduced to an “other” .   We are told that we are “too sensitive” when we complain about racist statements and yet it is our lives that are negatively impacted.  Each time a stereotype is allowed to pass unchallenged, it further cements the idea that whiteness necessarily belongs at the top of our chain of hierarchy.  Not only do we pay a cost for being assaulted by such vicious  racist constructions, we pay a cost to fight for our rights as human beings.  Conservatives continually call the media liberally biased, but when an issue of white racism is allowed to pass with virtually no comment how can the media possibly be understood as fair or equal?

I personally see nothing special about Philip that should allow him to denigrate another in  this manner.   If we are going to allow these people to supposedly represent the goodness that we have to offer, then they should be held to a higher standard.  As a Canadian and a commonwealth citizen, they embarrass me with their insistence on reducing others to support their supposed superiority.  Instead of God Save the Queen , it should be God Save Us All from the proliferation of such ignorance and privilege.