Rubina: The Slumdog Millionaire Child Is Up For Sale 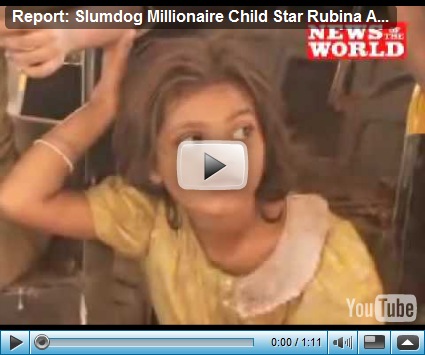 It seems that Rubina’s fame may yet be her undoing.  Her father cites poverty as the reason that he is currently attempting to sell his daughter for 295,560 USD.

"What they showed in the film is exactly how life is here. The government doesn't help us. We get nothing.

"We live in one room, seven of us sleep on the floor. I earn £2 to £3 a day. I have to consider what's best for me, my family and Rubina's future."

The family was recently given the equivalent of 17,733 USD “luxury apartment by  Slumdog sound engineer Rasul Pookutty. The property in Kerala, south India, was awarded to Rasul - who himself escaped poverty - by the local council in honour of his Oscar achievement.”   Rubina’s father Rafiq refuses to move citing that his life is in Mumbai.   Danny Boyle and producer Christian Colson have also set up a trust fund for Rabina’s education.

It seems that the real issue at this point is that her family realizes that media attention will be fleeting and so to capitalize on their daughters fame and achieve wealth they have decided to sell her.  This is not an uncommon occurrence India. A daughter can be sold to pay off debts that a family has incurred.  They often are forced into prostitution where the lifespan is decidedly short. Boys are most often forced to perform as carpet weavers, restaurant workers and agriculture bonded labour.

Very little is done to help these poor trafficked and abused children. The police are no help because they get kickbacks and access to the girls.  Since prostitution is against the law, it is the girls that are punished while the pimp faces little or no consequences.

In the west we have an image of what the perfect childhood.  We think of nicely manicured lawns, boys with paper routes, girls playing hopscotch and a life free of worry or care. For the majority of the worlds children this is nothing more than a fantastic dream, in fact it is the stuff of legends.   Until Slumdog Millionaire became a success many were decidedly unaware of just how challenging a life of poverty could be in a third world country.

Like it or not, every single western citizen is complicit in the impoverishment of children that leads to this sort of behaviour.  We want our products cheaply made and easily within reach. Corporations purposefully ensure that what we do buy, falls apart quickly so that we are required to repeatedly purchase the same items.  We do not hold them to decent product standards and instead line up time after time to purchase items that should have lasted for decades had they not been purposefully designed to fail.  How many times have we replaced a product that was perfectly functioning because it has gone “out of style”?

We cry and complain about jobs being exported to third world countries because they will work for far less than us as though we have some entitlement to the standard of living that we have become accustomed to.  When so-called illegal immigrants enter our countries, we again complain that they are taking our jobs.  Entitlement and privilege have become synonymous with Western life.

We care about what is happening to Rubina because she was made famous in a movie but we do not care enough to make the changes necessary to ensure that families are not reduced to selling their children in order to subsist.  We know about SAPS, currency devaluation and the unfair trading practices introduced by the IMF and World Bank, yet other than the occasional protest and purchasing of the “correct bracelet,” socially we make no significant demands for change because we realize that it is not possible to elevate the third world to our living standard; it us who must reduce our consumption rates.  If the third world were to develop along the same lines as the western world it would take the resources of 8 planets for it to be sustainable.

Each day that we make the choice to continue on this path, we ensure that children like Rubina become prey for the most contestable of crimes, slavery. Unlike many children, she is lucky in that her story is out there for all to see but there are literally thousands who are locked away from sight that are living under the most unimaginable circumstances because of our desire to consume more than our share.  Greed is at the heart of child slavery and until we acknowledge that we care about people more than commodities, children will continue to live lives of abject misery.  How much is your ipod worth to you really?