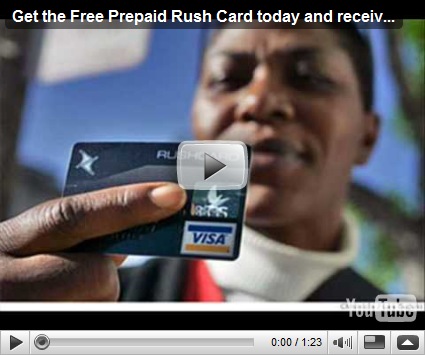 This is Russell Simmons, successful entrepreneur and philanthropist.  He thinks that everyone should be financially empowered so he  developed the Rush Card.  It’s a pre paid visa card. There is no credit check.  Everyone is eligible to sign up.  You don’t even need a bank account, just go to rushcard.com, choose your style and we’ll rush one right to you.  Some fees or restrictions may apply.  Then as soon as you add money to your card you can use it where ever visa debt cards are accepted and remember because it is a prepaid visa debit card you can only spend what you deposit.  You won’t go into debt.  You can even direct deposit your pay check onto your rush card.  Need another reason,okay.  Enter first friend when you sign up and we’ll put five dollars on your card as soon as you activate it.  That’s right, plus each time you refer a friend and they activate their rush card.  In today's world you have to have plastic.  We created the prepaid rush card so that everyone will have access to the American dream.  Go to rush card.com and sign up right now.

Well Simmons claims to be doing this out of the goodness of his heart;  yes,an overwhelming desire to help poor black people participate in the consumerist lifestyle created and maintained by bourgeoisie elites. Naturally such goodness could not go unrewarded.  Let’s look at the associated fees.

*MoneyGram charges a fee of $3.95 for this service
**Inactive cards; 90 days of no loads, no purchases and no ATM activity
***One Time Enrolment Fee of $2.00

Who is doing who a favour here?   No wonder Russell is willing to toss out a five dollar a friend refer a sucker reward.  He knows that every poor person that signs up for this card is only going to increase his bottom line.  Oh yes he is fulfilling a need alright, the one that all poor people seem to have to take it directly up the ass so that the rich can get richer.

Dr. Boyce Watkins of Syracuse spoke with John Hockenberry of WNYC and PRI's morning show and had this to say:

"Russell, he really--it's a very interesting sort of idea here--he's saying 'I'm giving everyone access to the American Dream,' but I never really knew the American Dream consisted of having a piece of plastic that puts people further and further in debt.   But even a pimp that helps--that quote unquote helps--a young woman get off the street, he can say I helped you because you were homeless when I met you and now you're not."

That is exactly what Simmons is doing, pimping black people for profit.  He knows that this is a fact otherwise he would not have gone to such great lengths to announce that he is a philanthropist.  One of the reasons that people remain poor is because they are often forced to pay more for items than people that are middle class or rich do.   Whether it is the high rate of interest on pay day cash advances, food, rent, or clothing, the working poor support this economy.

Each time a corporation reaches into your pocket they sell it as a convenience. See look how easy it was for me to rob you blind, wasn’t that fun, next time bring a friend.  There is a reason why these predatory businesses either congregate in poor communities or aim their products at poor communities; they know that the system is set up for them to exploit our most vulnerable members.

The fundies daily announce that the problems would be solved if people would just go out and get jobs but what they forget is that the moment you receive the reward of your slave labour (read: pay check) there is always someone standing there with their hand out waiting to be paid.  From the doctor to the landlord, all of the essentials of life have been commodified.  We have even created a system in which people are fined for paying their debts.  That’s right, that 17% interest on your credit card is a fine.  Will the ingenuity of capitalism ever come to an end?

Yeah Russell Simmons is a pimp, and a vicious class exploiter.  With friends like this who really needs enemies. The next time you see him on television remember what pays for his fancy clothing, homes and jewellery.  No matter how much he gives back it will not make up for what he steals with this so-called gift.