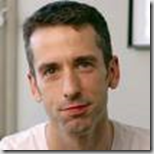 In a continuation of his pompous over privileged attitude, Savage once again refuses to apologize for his offensive commentary.  Are the words I’m sorry a foreign language to this twit? Really, he makes me ill.

A commenter pointed out to him that repeatedly using the word “retard” as a negative descriptor is not only offensive but ableist and how did the bumptious teller of truth respond:

I'm going to turn over a new leaf, TROS, and make a conscious, conscientious effort to break myself of the bad habit of using the word "retard." But I don't think the "retard jar" is for me. Instead, I'm going to use a substitution for the word. From now on, instead of saying "retard" or "that's so retarded," I'm going to say "leotard" and "that's so leotarded." (emphasis mine) I won't be mocking the mentally challenged, just the physically gifted. I will pick on the strong—and the limber—and not the weak.

One: That you have to be told in this day and age that using the word “retard” as a negative descriptor is wrong, speaks to your continual inability to recognize those that don’t fit into your tiny little framework of what constitutes a human being.  If someone were to say “that’s so gay,”  I bet you would demand an immediate apology without any form of rationalization.

Two: Just say I’m sorry.  It won’t kill you and believe it or not even over privileged white males do fuck up from time to time.

Three: Replacing an offensive word like “retard” with “leotard” is  not acceptable.  You are still mocking those that live with mental disabilities.   Using a different label to infer the same concept is not progressive. Let me put this into  terms even you can understand; calling someone a fag and then switching to queer still amounts to homophobic commentary…See how I made sure to use a reference that even you dear Dan could understand because we all know that unless someone is gay or lesbian, white, able bodied, cisgendered and class privileged they don’t matter in your rainbow world.

Four: It is not just a case of a “bad habit,” routinely using the word retard as a negative descriptor is ableist.  You would call something hateful towards the gay and lesbian community homophobic, so why not just admit that what you said was ableist…mmm I know ‘cause that would require an apology and the great Dan Savage is above that.

Five:  Here is a shocker, there are those that are mentally disabled that identify as gay or lesbian and therefore when you are ableist, you are insulting members of your own community.  It’s called intersectionality Savage, people can have more than one site of oppression.  So Mr. King of Gay rights, if you actually respect the lesbian and gay community you claim to represent, how about you acknowledging its diversity.   I know that with the personality of a smarmy used vacuum cleaner salesman it is hard to see beyond your own teeny world experience but if you are going to stand on a pedestal and claim yourself as a truth teller, perhaps you should begin with the revolutionary thought that all people matter.