Shii - The Wii for Women 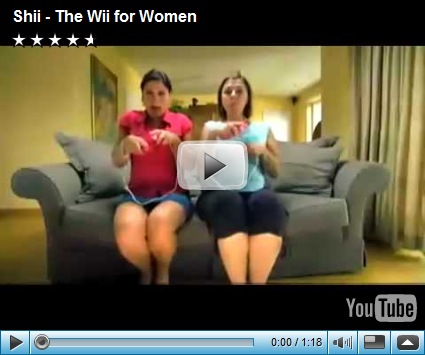 More hilarious sexist gender essentialism.   I am so tired of this  kind of thing popping up and people laughing along as though it is harmless.  What woman wouldn’t want to play games about cooking, ironing, cleaning, talking on the phone and finally servicing her man?  See that’s the joke, it’s supposedly fun to demean women at every opportunity for a laugh.

I find the fact that it is attached to the gaming industry that much more frustrating.  There are plenty of women that actively play video games and yet the largest percentage of games produced are marketed at teenage boys.  They are often highly misogynistic and violent towards women.  How often have we seen a game where players are awarded points for assaulting or raping a woman?  There is even a great series where you can undress digital women and get them to perform whatever act you desire. All this does is encourage the perpetuation of the idea that women exist to be devalued.

Across race, class and culture the universal truth is patriarchy continually reaffirms its power in order to gain in prestige, and power. When women defend ourselves we are quickly disciplined and labelled unwomen.  To threaten our gender identity serves to keep us performing a submissive form of femininity that  enriches men and maintains the gender hierarchy.

The genius of this little game is that the definition of  woman constantly changes and therefore women can be instantly demeaned simply for not obeying rather than a failure to perform femininity.  He who labels ultimately controls behaviour. When I look at the colluding women in this spoof, I don’t see agency, I see women who are performing at the behest of patriarchy.

There is a myth that because women discipline alongside men that we approve of the various forms of oppression however, once again as with every other ism it is about power more than it is about acceptance of oppression.   Many believe that the only way to avoid having themselves declared “unwoman”  is to act on behalf of patriarchy and discipline other women.  This way that can point the finger at another and say, “see I’m not like them” in the false belief that it elevates them and leaves them immune from criticism.

To those who claim that we are post feminist, or that this is just ironic sexism understand that the mere fact that you believe that this sort of behaviour is funny only proves your commitment to a perpetuation of inequality.  Sexism translates into things like domestic abuse, sexual assault, and poverty; there is always a cost to speech.