We Sure Loves Us Some Chicken 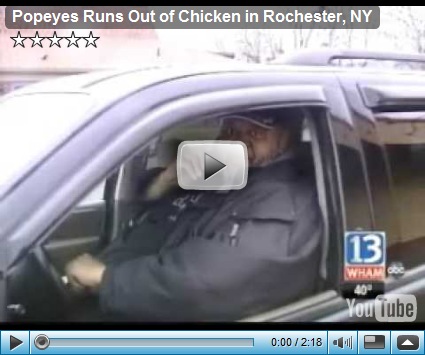 Well It seems that Popeyes decided to run a special on chicken and wouldn’t you know it they ran out.  This could have been simple story about incompetence until you notice the race of the customers that were viciously complaining about the lack of chicken.  Did anyone else notice that every single customer they chose to present is black.  Yep, just in case you are not up on the stereotype black people loves us some chicken.  The only thing better than a cheap chicken dinner is a side of  water melon and a quart of malt liquor to wash it all down with. 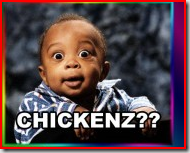 I find it hard to believe that there was not a single non black customer that was not upset at the lack of planning by Popeye’s.  Well you post racial enthusiasts, what do you have to say about this?  Should we just ignore the fact that the media is once again choosing to perpetuate a racist stereotype in the name of a false colorblind world? Is it black people that solely keep the poultry industry in business or do other races perhaps occasionally enjoy chicken just to add a little “ethnicity” to their palates?

I often write about racism as it is an ism that I must deal with intimately on a daily basis and invariably someone will give me the line about it getting so much better, or look a black family now lives in the white house.   It is so easy from a position of privilege to sit back and not notice the covert ways in which racism occurs.  I suppose this news agency thought that they were being progressive by finally not showing blackness as criminal but using another stereotype which is equally as hurtful does not change the racial indignity that occurred in this little segment.  As the reporters sat their smirking at this little fluff piece, I wonder if they were aware of the racism that they were promoting?  Centering blacks in a story is pointless if the sole aim is to reduce us as human beings.