What Is and Isn’t Racist

In our society the ability to label is an expression of power.  When we label we encode an object, person, or speech with meaning.  This is often an ability that is granted to whiteness as it is the group that exists with the most social power.  To be called a racist, or labelled a racist today is something that some express disdain for.  It is necessary to note that in many cases the behaviour that caused the label to arise is not necessarily an issue, it is the label that is the issue.  Due to the power that whiteness exists with, it is assumed that part of this undeserved privilege is the ability to act without being forced to own a label without consent.  Negative stereotypes have historically been attached to marginalized bodies as a way of maintaining our racial hierarchy.

When whiteness creates an image and then declares it not racist, there is a clear conflict of interest.   Of course they don’t want to be identified as oppressors despite the fact that whiteness acts systemically to marginalise bodies of color.  Somehow the label of racist is deemed more damaging than the harm that occurs to POC when we are reduced. Let’s be honest, unless you are a card carrying member of the KKK whiteness is not going to admit when it is racist.  We know that racism is systemic and therefore; all of those that claim not to engage in racism share some degree of guilt, either through active or passive action.

Let’s look at the infamous Obama Bucks. They were created by white people who declared that it was not their intent to be racist.  The image just magically included signifiers that have been used to denigrate Blacks but somehow the image was deemed not racist. Another favourite of mine; the Negro Cookie made by Ted Kefalinos, proprietor of Lafayette French Pastry. Of course he also declared that the “cookie” was not racist.  He could make that declaration because he has a Cuban brother in law. 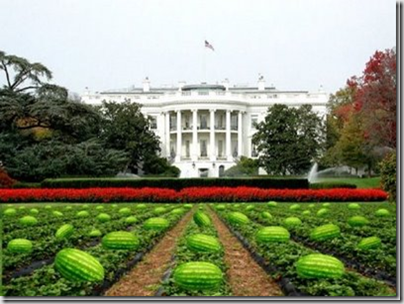 Dean Grose the Mayor of Los Alamitos sent out an e-mail entitled No Easter Egg Hunt At The White House This Year.   Yep us coloured folk sure do loves us some watermelon.  I am surprised he didn’t have chickens running through the watermelon patch to complete the picture. Of course Grose didn’t mean to offend and supposedly had no idea of why the watermelon imagery was offensive.

I could present image after image, of whiteness engaging in racist behaviour and then either claiming that they did not know that it was racist, or deciding unilaterally that while said image or activity might be offensive, that it is not racist.  Clearly no matter the denials, the above images are racist; they play on racial stereotypes to demean.

When I originally posted the Obama bucks and the watermelons on the white house lawn, I received many e-mails asking why the association with Blacks and watermelons is understood as racist.  Though I could have told them to hit the google as it is not my job to educate, I took the time to respond to each and everyone one of them with a history lesson.  I do believe that you would be hard pressed to find a black person raised in North America who did not know of the association of Blacks with watermelons  and why it is offensive.  It is a slur regularly thrown at us.

Here is a very basic fact because I am a woman of color I have spent my entire life learning to negotiate the racism that is aimed at me by whiteness.  In fact, in order to survive in this racist, patriarchal, capitalist state, I needed to learn from a very early age to understand how racism works in order to protect myself.  This is something that every single person of color must do.

Due to the fact that whiteness  exists with underserved privilege it has the option to remain purposefully ignorant of the lives of POC.  Whiteness can choose to never engage with POC in any meaningful way whereas; the same option does not exist for POC.  Even white allies who do critical anti-racist work have been known to disengage when the stress of the ignorance and bigotry become to much whereas; each day for a POC means confronting whiteness.

My daily lived experience as a POC even without the critical anti-racist training that I have undergone is enough to make me an expert on whiteness and the ways in which it works systemically disenfranchise, marginalize, and exploit.  No matter how sympathetic someone who is white is, they will never know what it is to be confronted with the racism that POC must daily negotiate.  Whiteness will never possess the knowledge or the experience to declare that something is not racist.

When dealing with race, whiteness continually stumbles upon privilege and  self interest.  Though there are those that are committed to unpacking the knapsack, it is a difficult process that is never ending.  Whether it is race, class, ability, sexuality etc., we all become used to benefits that become encoded to our bodies and develop a sense of entitlement to attempt to justify  the dissonance in worth and value.

When we enter the spaces of those that we know to be socially marginalized the basic minimum requirement is that oppressor take the time to learn some basic 101 knowledge before engaging.  If POC continually have to educate whiteness on the ways in which they oppress it stops us from dealing with larger issues that need to be addressed.  The fact that someone even feels that they are fit to comment in these spaces and declare in opposition of the lived experience of a person of color is an expression of,….say it with me now, P-R-I-V-I-L-G-E.  I don’t need to hear your opinion, it will never contradict my 30+ years of dealing with racism.  I am not going to do the work for you and present stats, or papers because they are easy enough to find if you have the smallest amount of commitment.  I am going to tell you repeatedly every single time you invade my space with your ignorance to get your 101 on.  If I must spend my life learning how to protect myself against racism, the least that you can do is take the time to learn the basics.