When Genitals Are All The Rage 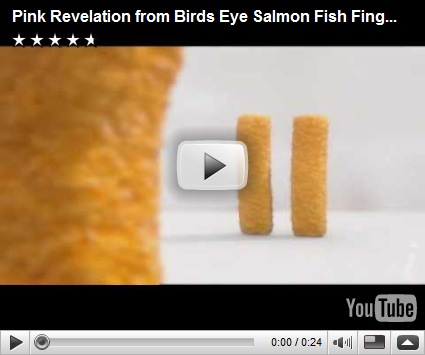 Of course the female fish stick has this throaty voice, which is all about temptation.  When she strips off her coating are we at all surprised that it is nice and pink on the inside?

This commercial is about a salmon fish stick and yet if you close your eyes it could be about a strip club.  Heaven forbid we talk about the health benefits of salmon; why even bother when we can sexualize women and in the process reaffirm the idea that female sexuality is nothing more than a commodity that patriarchy can trade upon to increase profits? 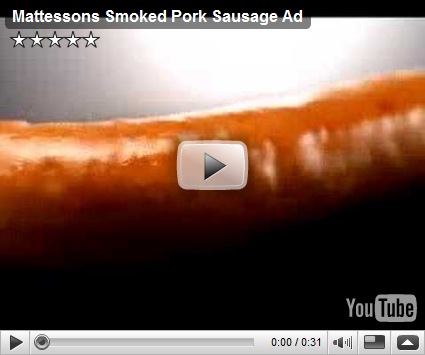 MMMMM you want it don’t ya?    Who wants the pork? Just look at how powerful the sausage is. It can perform various tasks to satisfy your every food fantasy.   Unlike the fish stick the sausage is an active agent, which completely fits with its masculinised identity.  It seems natural that this company would fetishise  the sausage because of the phallocentric worship that we socially participate in daily.  From porn to the mundane the male gaze is particularly privileged.   I do believe that Freud in particular would have loved this commercial.   What can be more evidence of our so-called penis envy than an advertisement that not only puts the penis at the center of the conversation and encourages us all to participate in masturbatory bliss?

Even as I wrote the above, I was highly aware that one of the first thought of critics would be that sex sells.   I think it is important to concentrate on more than just the sexualized aspects of the above commercials because each gender is presented in a specifically essentialist way.  It’s not just about titillating the audience, it is about reaffirming our ideas of what constitutes masculinity and femininity. If female sexuality is constantly seen through the male gaze it can never be understood as active, or seeking self pleasure whereas; the male as the active agent confers not only individuality but power based in the so-called power of the penis.

If we are going to use sex to sell, reaffirming a sexist understanding of each gender only emboldens our dissonance in worth and value.   As we take in these images it is important to reflect on what they truly mean; these are not passive images and yet daily as we consume advertising we have a tendency to ignore the various ways in which we are being disciplined and trained.  These images have become normalized because we have allowed them to be so and not because they represent qualities that are inherent to each gender.  A woman does not necessarily perform continually for the male gaze and the penis does not represent the height of western achievement.