Woman Is The Nigger Of the World

I recently read listen to racist music at stuff white people do.  It got me thinking about the song Woman Is The Nigger Of The World by John Lennon. 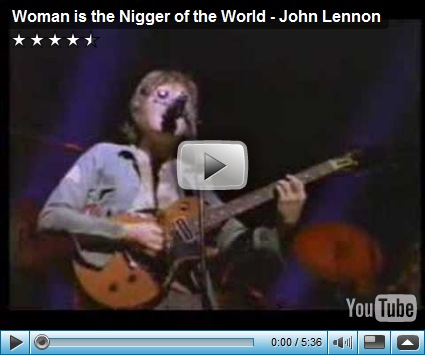 I suppose at the time that this song was written it was deemed progressive. It reminds of the Student as Nigger by Faber which was published a few years before this song was released, which pushed the same sort of idea. Today this form of appropriation is readily engaged in by the GLBT community with the phrase gay is the new black (I bet they thought they were being original).

Though much time has passed since the song and the paper were released, whiteness still defines oppression by how it treats blacks.  White privilege means the ability to erase others while complaining that one is uniquely oppressed because you are experiencing a form of discrimination that is normally reserved for a group that has been assigned the identity of “other’.  Heaven forbid any white person live with a small dose of the kind of systemic inequality that blacks face on a daily basis.

Appropriation of the struggles of others has been the stock and trade of most if not all social justice programs led by whiteness.  Whether it is feminism, environmentalism, disability rights, or animal rights, all have a vested interested in promoting whiteness.  Their continual refusal to employ intersectionality is proof of a lack of commitment to truly challenge power dynamics.

A white man singing woman is the nigger of the world is meant to confront and destabilize  the power of patriarchy however, it ignores the fact that white women live in privilege in comparison to black women.  ‘Woman’ cannot be subsumed under a monolithic identity because we all experience oppression differently.   While white women are oppressed by sexism, they still exist with the power to oppress with racism.  Reading the daily exchanges in the feminist blogosphere this is evident to anyone who examines race critically and yet we are still expected to come together under the banner of sisterhood when it suits the interests of white women.

POC are often told how much better things have become but if we are still fighting against the same constructions after decades of activism,  how can we declare progress? Woman is the nigger of the world is just as offensive today as it was when it was first sung all of those years ago and yet we can still see its echo across time in feminism, and gay rights.

I have spoken passionately about racism and the painful results of being daily “othered,” only to find my voice drowned out by self righteous pearl clutchers, intent on embracing their pedestals to the bitter end.  Legitimate critique is presented as though I am mean, immature, or angry without cause. The difference between white rage and and black rage is that our anger is always deemed to be emotional and highly illogical.  The logic argument is particularly harmful in that it asserts the correctness of whiteness and places it above critique.

One of the hardest things to do is critical self reflection.  It is far easier to succumb to anger and deny even the mere possibility that our actions or language not only cause harm but that we benefit from damaging another human being.  We have been trained since birth to invoke our various privileges and thus maintain our social inequities.  It is not hard to believe when someone says that they are hurt, if we look outside of our privileges.  The idea that anyone should exist with the continual right to offend or declare the feelings of another irrelevant is ridiculous.  A stigmatized and or oppressed individual is not whining when they express their hurt; their feelings are worth something if you believe that all people matter.