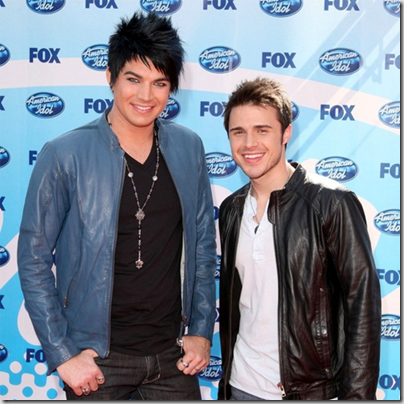 Okay,you knew I could not let today pass without commenting on the travesty that occurred last night.  From the minute I heard Lamberts rock screech I was sold.  After the disasters that have graced the idol stage (yes Sonjiyah), I was about ready to give up on the show altogether.  Adam made idol relevant again and made me believe that it offered opportunities to an undiscovered diamond in the rough.

From the minute those photos of him kissing another man were revealed the fundies went into over drive to smear him.  So large was their bigotry that they refused to acknowledge his great talent and showmanship.  Who can forget the awesome job he did singing mad world or the fact that every time his voice went into the high register he channelled Freddie Mercury.  When he was singing last night with Queen the only thing I desperately wanted was for Kris to shut the hell up.

Kris Allen came to symbolize their great hetero hope.  In voting for him they hoped to make the world safe for children, rainbows (oops sorry gay symbol cannot use that) and bunny rabbits.  Idol certainly did not help matters by framing it as a battle between the “boy next door and the leather glam rock boy”.  If I hear the term guyliner one more time I swear to God I’ll scream.  When are people going to get it through their thick heads that gay and bi men are the people next door? They participate equally in our society and deserve to be treated with respect.

I feel terrible for Adam because he was robbed of something that he so clearly deserved because of rampant homophobia. I feel sorry for Kris Allen because deep down he has to know that his victory was false.   He won because America is still harbouring ridiculous fear of teh gays and not because of his talent.

I know that Adam will get the opportunity to release an album because every idol runner up has.  He will probably sit down one day with Hudson and laugh about the ways in which America got it wrong because it is certain that we have not seen the last of him.   The fundies may have won round one of this battle but they will not be able to stop a talent like Adam from achieving the fame and acclaim that he clearly deserves.