I live in a house of men.  Even Darren our newest addition is male.  Is it any wonder that I name the inanimate objects around the house with female names? How is it that I, a devoted womanist have ended up being surrounded by men?  Some would call it a cosmic joke.

I cannot tell you the last time that I went an entire day without having to participate in a conversation about balls, fart, poop, and the most recent addition nipples.   Mayhem has recently taken great interest in his nipples.  Not even at the diner table am I spared.

I was recently informed that as the only female in the house that I should be considerate and lift the toilet seat when I am done with it.  How do you like that for tyranny of the majority?

I have learned to pick my battles with the awareness that even in the testosterone overload at least my guys are a lot more aware of the sexism that they are capable of engaging in than many men/boys that I have run into.  Recently Destruction stopped speaking in mid sentence when he realized he was about to announce that his friend was crying like a little girl.  I do not allow the feminine to be used as a  pejorative in my home.  He caught himself and switched to baby and looked at me and smiled. His father high fived him announcing that it was “a good save”.

Nothing in my home is sacred.  My tampons have been turned into speed bumps for dinky cars and on more than one occasion my pads have been used to redecorate the bathroom.   The boys of course just see them as additional toys, while I get irritated every time I reach for what should have been a full box only to find them empty.’

Living in a house of men is enough to drive any womanist/feminist right around the bend.   Sure, some of it comes down to individual idiosyncrasies and some of it I am sure is a plot to make me absolutely loose my mind.  For instance how many of you can go shopping without stopping to check out all of the Man Q’s 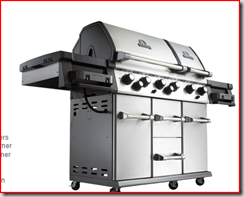 (Read: BBQ’s)?  They are sometimes referred to as male cooking centers.  The unhusband even has this fantasy about this 3500 dollar behemoth that hooks up to the same gasline as the house. Not even if I won the 649 would I give in to that one.  Meat, beer and Man Q, of course not necessarily in that order become the hot topic every spring.  It seems that the Man Q is some sort of status symbol (read: penis enhancer) by which men judge their cave manness.

And then there is remote control for the television.  I would like to know how my vagina renders me incapable of controlling the volume or changing the channel?  I have had to put my foot down and demand control but at least it was ceded without  whining and crying.

Everyday in small ways I am working to make them aware of one simple truth: If Momma ain’t happy then no one is happy. I may not always be successful and there seems to be way too much bathroom humour but at least I know that at the end of the day if I say stop that is sexist, I never hear the words “you’re too sensitive”.  Even if someone cannot understand exactly why what they said or did is sexist, the fact that they are willing to end the behaviour shows respect and if everyone started from a belief in respecting others there would be a lot less negative engagement with the isms.