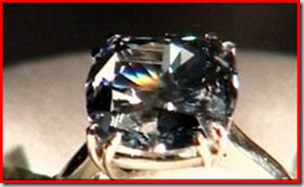 The blue diamond sold at a Sotheby's auction for record 10.5 million Swiss francs on Tuesday.   According to Yahoo news, David Bennett chairman of Sotheby's jewellery department in Europe and the Middle East stated, “This is already a new world record price for a fancy vivid blue diamond and a new world record per carat for any gemstone (at auction).  It is fantastic in this market and shows that these rare things are very much in demand," he said.

Yes, it is absolutely so fantastic that London-listed Petra Diamonds is able to pay South African workers next to nothing while they reap record profits.   The profits will not  go to improve the lives of the poor in South Africa who live in shanty towns without running water and electricity.  They certainly will not go to dismantling an oppressive system which keeps an elite group of blacks in power while whites continue to have unfair systemic advantages as well as access to all real avenues of power.  The legal system of apartheid may have been dismantled but social divisions still exist and it is the people of color who largely occupy the bottom rung.

The day that Nelson Mandela walked out of his prison the world declared that racism was solved in South Africa.   Much  like the western world it had dismantled its legal oppressive system and therefore there existed no further need to press for change.  To continue to point a finger at South Africa would mean that supposedly civilized countries like Great Britain, France, Canada and the US would have to look at their own internal policies and examine the ways in which white hegemony continues to be a defacto position.  The hypocrisy of such a position is evident and we therefore choose to celebrate just how far South Africa has come.   The move to a less overt form of racism is far more palatable for whiteness, after all it is only damaging for people of color and therefore a focus on the changes that need to occur are not necessary.

Much like the US, South Africa can point to black leadership and therefore declare itself post racial.  It is not until one strolls through the suburbs and realizes that the owners are still white and the maids are all still of color that one realizes that real and lasting change has yet to occur.  Freedom should mean more than the ability to move at will; it should also involve social equality and this is something no nation has been able to achieve.   Equality continues to be an issue because whiteness still refuses to divest itself of unearned privilege and because we steadfastly hold on to an irrational capitalist mode of exchange which is predicated on the exploitation of the most vulnerable class of people. Men like Biko did not die so that blacks could have freedom in name only.

Bennet may find it positive that someone is able to spend 10.5 million on a shiny bauble, however I think that this stands a testament to how greatly we have misunderstood what is of true value in this life.   One does not amass that kind of wealth without exploiting someone and since women and children of color are the world poorest citizens, it is fair to say that this diamond was paid for in blood, death, and pestilence.  Bennet might as well have declared like Marie Antoinette let them eat cake, for it is a certainty that those that labour in the mines know nothing of the luxury that the purchaser obviously assumes as a given.

How many will look at the story of this diamond and fail to recognize the deeper consequences of what it means.  Just like many other items, diamonds mean oppression and exploitation.   When we think about what a diamond is, a shiny rock that reflects light, how is it possible that we have come to find this more valuable than a living, beating human heart?  How is it that we have come to place this above a fragile human life?   Value, prestige and capitalism have warped our values to the point where we do not understand that the system is corrupt and that real value (read:humanity) gets trampled upon daily.

10.5 million spent on a shiny stone is not something to celebrate when some are so poor that they cannot even afford the basic necessities of life.   These diamond mines will continue to be savaged for profit by rich white capitalists just as they have always been.   Raping Africa and her people of color has become a veritable pastime that some have come to view as natural as their next breathe and therefore these elites should have decency to own what it is they are actually doing.  Do not call it progress, when so many continue to suffer and do not speak of opportunity when it involves servitude and neo-slavery based in capitalism.   If it is to ugly to recognize for what it is, perhaps that is because it needs to end.