This is a guest post from Mar from The Mongoose Chronicles

Rogue economist escaped to the bright side. Writer, talker, dancer, songwriter, singer, walker, runner, roamer, cook. Fierce lover of family and friends. Lover and defender of my womanness, Africanness, my Caribbean heritage, my Barbados, my right to take up my space and protect our space. 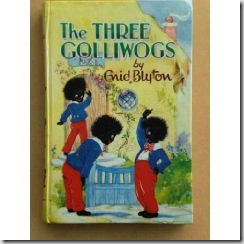 In February of this year, Carol Thatcher, daughter of former Prime Minister Margaret Thatcher, was dropped as a roving reporter on BBC1's The One Show after calling a black tennis player a golliwog in the show's backstage green room, and then refusing to make a full public apology over the remark. In the aftermath of her sacking, the BBC received over 3 000 complaints against their decision to fire her, and the mayor of London Boris Johnson publicly declared that he thought it was the wrong decision.

Thatcher was back on the air last week on BBC One's Andrew Marr Show, and not only defended her use of the word - which is not surprising given that she refused to apologize in the first place - but also made two statements which I found indefensible. She first informed us of the many letters of support she received and of the fact that her golliwog collection had now greatly increased since like-minded people had included the keepsakes in their fan mail; and she suggested that the whole brouhaha was a result of people being overly sensitive and politically correct. 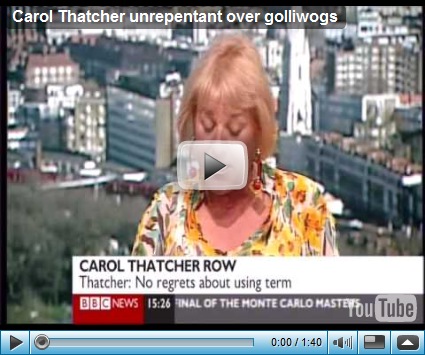 Now, I'm going to try and keep this short because we've had an extended conversation about this before, and because this kind of wilful racism does not stand up to argument. But the fact is, just because you grew up seeing golliwogs on the side of your jam jar as you sat at your breakfast table with your white, wealthy family and friends, does not entitle you to decide for another group of people what they are and are not allowed to be offended by. Carol Thatcher is a white woman, who was never the subject of the racist taunts of which the word 'golliwog' was a part, and who clearly does not understand that even the origin of the figure as a blackface minstrel is in itself far from flattering and arguably racist. As Labour's Jennette Arnold pointed out in response to Boris Johnson's defense of Thatcher's position:

"The symbolism of the golliwog is colonialist, racist, and harks back to time when black people were dismissed as slave, servant, and figures of fun.
"It is an image associated with the demeaning of black people. There are no second chances when anyone in public life uses such offensive language.

Boris Johnson seemed to think that Thatcher should have been disciplined internally with a small slap on the wrist, arguing that [emphasis mine]:

"The way to deal with it is if someone says something a bit offensive in a green room and you're the producer of the show and everybody else has taken umbrage and feels uncomfortable ... you take that person on one side and say: 'Listen, you've got to understand we've got to work together and you've got watch what you say and you've got to be sensitive,' but I don't think you fire someone. I really don't."

I often wonder how it is that people's self-censorship mechanism fails to engage in these situations; how it is that they do not realize that as people outside of the group whom this directly affects - and worse, part of the group that has perpetrated the racism in question - they don't get a vote. Now Boris Johnson's comments are less to do with whether the word itself is offensive and more to do with corporate equality policy, which is an important debate for everyone to have, but the fact that he calls the expression 'something a bit offensive' gives us a clue about how damaging he thinks this language really is (not very), and in fact, he should just have shut up.

I was disgusted by Thatcher in this Andrew Marr interview, because alarmingly, she seems to be part of this club of golliwog collectors who think their quaint little hobby is more valuable than the historical and current subjugation of an entire group of people; and worse, she is also one of those who has assumed the role of victim because The Man wants to take away her right to hurl racial slurs at people. And the rest of us should just get over it so she can have her golliwog fridge magnets and make fun of black people.

The issue of whether the term 'golliwog' and its image are offensive seems to be a recurring one. And for me, it is simple. As a small child, one of my favourite Enid Blyton series was The Three Golliwogs. I adored the characters, Wiggie, Waggie and Wollie, and saw them as just three toys come alive who got up to mischief. Of course, I grew up in Barbados. By that time, no one had ever called me a golliwog, and I hadn't yet learnt about the practice of blackface or really any of the history of slavery. As I got older and learnt more, no one needed to point out to me that these characters were a product of a racist time and tradition. It naturally became apparent - even before I learnt that one of the original names of the golliwogs was 'Nigger'. So just because you found a name or image harmless in childhood, either because you were part of a privileged group towards whom it was never directed, or because, like me, you were black but lived in a society where that kind of nomenclature was not a common form of attack against your group, that does not mean that the word or image was not harmful or racist. Both sets of circumstances can obtain, and in this case, they do. And here's what I also find problematic: it is not alright to say "well, people at the time were racist. So what can you do? I'm going to continue to read this book to my children because people nowadays are way too sensitive." You can do that, but if you do, be aware that you are in fact perpetuating racist stereotypes, and be prepared to be called a racist when someone comes to your house and sees your little golliwog fridge magnets. Because the fact that you know better and still refuse to adjust your behaviour means that that's exactly what you are.

A few months ago, I went exploring a closeby neighbourhood in search of cheap hangers on which to store my ridiculous amounts of clothes. (I'm always buying hangers, because apparently we have a hanger ghost who cannot cross over until she has hidden all of mine under bushes and brambles far and wide. Either that or I should stop shopping. My money's on the ghost.) I came upon this home supply store with cheap hangers of all materials and colours and as far as the eye could see! It was some kind of hanger paradise! So as I was scooping madly, my eyes happened upon the back of the store, which seemed to be where they stored the toys, and against the entire back wall, from floor to ceiling, were all kinds of toy golliwogs, their hundreds of black faces, white eyes and red lips grinning back at me. I have to say that I was horrified. I immediately felt vulnerable, because if these were the kinds of people who would so unashamedly offer these items for purchase, what, I thought, would they do with a real, live black person (I was the only one) in their store? Because clearly, they weren't worried about seeming racist.

It must have been people such as this who sent Carol Thatcher their letters of support, people who are banding together to protect their right to display icons of the racism they practice when they think no one's listening. Well, carry on with your crusade. But don't be surprised if you lose your job over it.