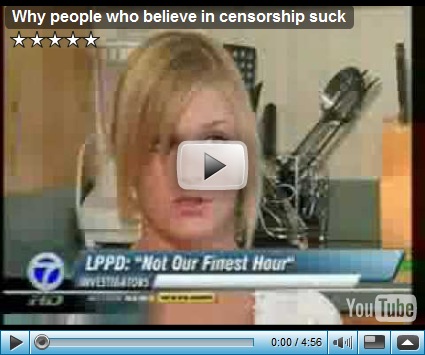 Imagine that someone you loved was in desperate need of medical attention, would your first concern be about the language that you used to call for help?  Adrainne Ledesma would learn the hard way that no matter how desperate the circumstances good girls don't use the F word.   Sgt. Robert McFarland hung up on her three times without even bothering to find out the nature of the emergency because her language was to upsetting to him.  If this were not bad enough when she went to the police headquarters to get help she was arrested on a trumped up charge.  She was cuffed and cited for disorderly conduct and abusing 911.

I cannot help but wonder if  McFarland would have found the language so offensive coming from a male.  He had no problem swearing back at her and calling her a buffoon.  Apparently it is his prerogative to swear at will but no matter the circumstances young ladies must be proper at all times.   Often behaviour and or language that is deemed acceptable for males is strictly disciplined in women.

“He asks her are you gonna swear again you stupid _____”  It does not take much of an imagination to figure out that the word that was bleeped out was bitch.   He further called her a “hostile girl,” when he finally got around to reporting a potential emergency to the ambulance and fire.   Though the department tried to declare this an anomaly, one does not wake up one day and suddenly decide to be sexist and discriminate against women.   Clearly on this day he decided that his male privilege  meant more than the potential risk that  Ledesma’s life was in grave danger.   The fact that his position was originally backed up by the department further proves exactly how patriarchal the police department is.  It is only upon public attention that they decided to punish McFarland with a two week suspension without pay.

It is not hostile to swear when you are terrified that someone you love is going die and  it certainly is not acceptable for an officer of the law to swear back in response.   McFarland behaved the way that he did because each day society reaffirms that women are second class citizens.   He further believed that because officers of the law are given certain powers that he had the right to act with impunity.   Often the blue wall will wrap itself around the police to blot out criminal activities.  Since they habitually deal with the poor and disenfranchised their  criminal activities often go without punishment.   Make no mistake about it, what McFarland did was positively criminal and a two week slap on the wrist is only going to further entrench his belief that he is above responsibility for his actions.