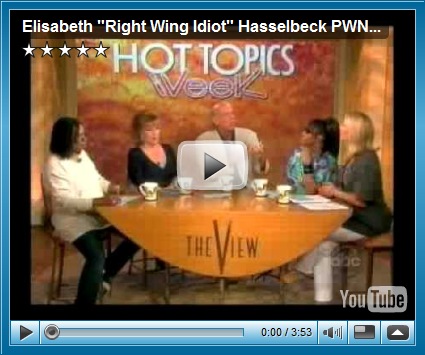 I don’t write political posts very often, however I thought the commentary from Jesse “the Body Ventura” was honest and forthright.  Elizabeth once again looked like a fool which made me love this particular clip all the more.  As she sneeringly asks if he wants to be put in a full nelson, he passionately speaks truth to power in a way that few politicians ever do. Below you will find a small snippet of what he had to say, however the full video really should be seen.

Torture is torture and if you are going to be a country that follows the rule of law which we are, torture is illegal.  If waterboarding is okay then why don’t we let our police do it to suspects so that we can learn what they know?  If waterboarding is okay why didn’t we waterboard McVeigh and Nichoals the Oklahoma city bombers to find out if there were more involved?  We only seem to waterboard Muslims.  Have we waterboarded anyone else?  Name me someone else we’ve waterboarded?  …The point is nothing is going to happen because they’re all involved.  The Dems and Repubs are both involved and that why president Obama’sbacking off from it and they’re not going to do it now.  It’s a good thing I’m not president.  I’m an independent because I would prosecute the people that did it. I would prosecute the people who ordered it and they would all go to jail. ..Look how outraged we were when waterboarding was done to our vets.  Where do you think we learned it from?  We created the Hanoi Hilton in Guantanamo, that’s our Hanoi Hilton.  People have died there. People are tortured there, I’m ashamed of my country.  ..We should be above them. Torture is wrong.  Enhanced interrogation is Dick Cheney changing a word. Dick Cheney comes up with a word to cover his ass.  I’ve said it before you give me a waterboard one hour and Dick Cheney and I’ll have him confessing to the Sharon Tate murders. One hour.

I found it to be particularly telling when he pointed out that the only people the government has ever tortured are Muslims.  Clearly there is an element of racism and Islamophobia behind the decision to take on such a dehumanizing course of action.   He was particularly on point when he states that despite the supposed positive results that the Bush regime claimed to have drawn from torture it is not used domestically..The fact that torture is acceptable for foreign bodies indicates that this is only because they are already understood as “other”.  These shameful incidents reveal what is possible when we allow privilege to manifest itself in our decision making process.