Jay Mohr on Michelle Obama: Dude Looks Like A Lady 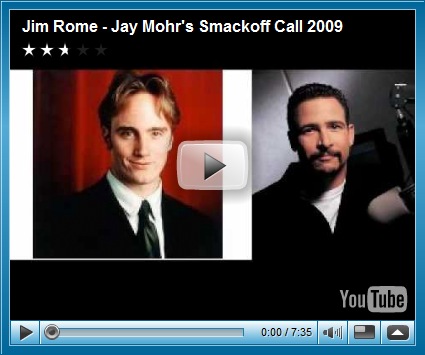 I’d like to talk about Kevin Garnett this guy is the Michelle Obama of the Celtics. He doesn’t really do anything but damn he looks good doesn’t he? Michelle Obama that is a big dude. When Barack plays pick up games at the White House, you know he picks Michelle as at least his forward, maybe his (inaudible) depending on who is on campus that day.

That has to be like being married to Elton Brand.  She is a big, big dude.  I like when she put her arm around the Queen of England and just put her in a headlock and told her I’ve been waiting 200 years just to put my arms around you lady.  I love that.  I love how she shaved off all her eyebrows and then drew them back way too high into an arch and then straight back down so she always looks super surprised.  She kind of, Michelle Obama kind of looks like the count on sesame street.  That great one ah ah ah, one black president ah, ah, ah.  What a year.

Is everyone amused?  Once again Michelle's femininity is challenged in the name of comedy.  What can be more hilarious than over privileged white men displaying their racism, sexism and transphobia for the world to see.

The black woman has historically been constructed as the ultimate “unwoman” to justify the exploitation that we have been subjected.  These same white men who find it acceptable to label us as overly masculine, have no problem repeatedly violating our bodies sexually.  I wonder if Mohr was channelling a slave owning ancestor when he made his remarks.

Time after time, we have seen these attacks aimed at Michelle and yet there is very little commentary that defends her.  Even the much reviled Sarah Palin received the benefit of feminist activism when they marched to her defence against sexist attacks. Unless they (read: white women) are appropriating her by making comparisons to Jackie O,  feminism has remained largely silent about the sexism and racism that she has had to endure. Your silence convicts you and makes you just as guilty as men like Mohr, who consider demeaning women to be just good ole boy fun.

How many times must it be said that racism and sexism are fruit of the same poisonous tree?  When such commentary is made without correction it affirms the social power of white men to label and demean at will.  Today their commentary may be aimed at a prominent black woman but  tomorrow it will be aimed at a white woman.

When sexism is aimed at white women, WOC are expected to join the picket lines in the name of gender solidarity and protest yet we are rarely to never accorded the same respect unless it suits some form of ulterior motive.

A commenter on Feministing asked me why I am so hard on white women and the answer is really very simple.  By ignoring racism in their activism, white women prove that they are not committed to intersectionality and that their true goal is not equality for all women but reaffirming their so-called innate right to exploit in the same manner as white men.  Gender as the only site of oppression ignores the issues that many women face and reaffirms the hierarchy that has become normalized by out racist, patriarchal, cissexist, homophobic, ableist state.  There can be no advancement without dismantling privilege.