Joe The Plumber: Men Kissing Throws Me Off 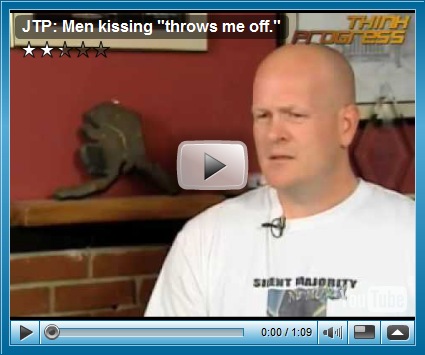 Hate me for what I believe in but you gotta at least respect that I’m not sitting there just trying to earn a buck off my fifteen minutes.  You know, do I want to make some money – absolutely but I’ll do it the right way.

Voiceover: Even with the books struggles Joe thinks he probably has about a year left of the spotlight

Joe: I think its great but I can see it from the other side where people are like man, just friggin go away.

Joe is worried about his son seeing an act of love while the world worries for the child that is being brought up by a troglodyte homophobe.  This is exactly how prejudices and bigotry is perpetuated, teaching it to children.  It is the equivalent of  child abuse to teach a child to hate and take advantage of their undeserved privileges.

As he sits there making his less than wise professions regarding  the so-called “gay lifestyle,” he fails to acknowledge that his beloved son may grow himself to become a bisexual or gay man.  Imagine having to tell a father that you know to be so homophobic the truth about your sexual orientation.  Just like every other homophobic man, heterosexuality is the default position and therefore Joe can not conceive of the fact that he is possibly setting the stage for future turmoil in the life of the child he claims to love so much.  As a parent I was disgusted as I listened to the bile pour from his mouth.

If we did not raise children in a society that privileges heterosexuality, there would be no confusion.  They don’t understand bisexuals, gays and lesbians as the same as everyone because we teach it to them, not because there is anything unnatural about being bisexual, lesbian or gay.

If the fundies are so worried about the confusion of children, the simple answer is to speak to them openly and honestly.  The first time your child looks at algebra they will be confused but do we do not get upset or demand that the schools stop teaching it because a child does not immediately understand.   Children are not born all knowing and we teach them right from wrong, therefore if we explain from the very beginning in simple terms that love is love and that all bodies are valuable, they will understand that being bisexual, lesbian, or gay, is just as normal as being heterosexual.

I really do hope as Joe said in his interview that his fifteen minutes of fame of will be over soon because he is not using it constructively for the greater good. In a perfect world he and Carrie Preejan would skip on down the yellow brick road to oblivion until they learn about decency and tolerance.