John & Kate Plus 8, Plus a Scandal 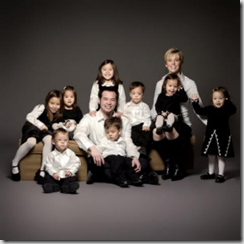 The Gosselins are the stars of the highest rated show on TLC - “John & Kate Plus 8.” America is simply fascinated with how a family of eight manages everyday activities that we take for granted. From potty training, to ear piercing, each adventure with the Gosselins reminds us that no matter how hectic our personal lives are, Jon and Kate endure e a level of insanity that is into the stratosphere. Since our introduction to them on a one-hour special entitled “Surviving Sextuplets and Twins,” they have become our new age Ozzie and Harriet; a televised guide to pure Americana.

When rumours recently surfaced that Jon might be having an affair with 23 year old Deanna Hummel after he was filmed leaving a bar with her, Americas favourite family suddenly appeared to be in trouble. Jon released the following statement after the incident, “These allegations are false and just plain hurtful I did not cheat on Kate. I need to be more careful and aware of who I am associating with and where I am spending my time,” said Gosselin. Instead of showing pity for the victimized party – Kate Gosselin, the public immediately began to attack her.

Kate’s no nonsense, brash style has publicly been declared the reason that Jon was unfaithful. It isn’t enough that she is kept busy all day raising eight kids, shopping, cooking and cleaning; the fact that she is not submissive to Jon’s every whim and has ideas about what the family should and should not do is deemed unacceptable. How dare the nations “brood mare” actually have a mind of her own?

Jon’s alleged infidelity took place while Kate was promoting her new book, Eight Little Faces: A Mom’s Journey, and many speculate had she been home raising the kids instead of leaving Jon to his own devices, no suspicion would have been cast on Jon in the first place.

Many commentators site concern for Cara, Mady, Alexis, Hannah, Aaden, Leah, Joel, and Collin. What kind of mother makes a profit from her children to begin with? Allowing invasive cameras into a family home has proven to be a disaster for many families and therefore Kate’s desire to replace the income that she lost from being a nurse when she had to stay home and care for her children is secondary.