Men and Feminism: An Interview with Shira Tarrant

This interview was conducted by Allison McCarthy 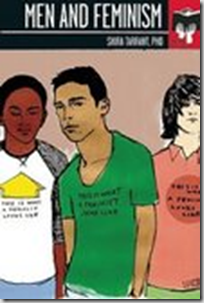 Shira Tarrant isn’t afraid to go into unexpected territory.  In a transgression of what fellow reader Jillian Lauren calls “perhaps the only taboo topic” at Hustler Hollywood Café, Tarrant, along with Michelle Tea, Michele Matheson, and Jessica Pauline, fielded a conversation on sex work and feminism on May 13 as part of an ongoing In The Flesh: L.A. monthly reading series.  Tarrant notably addressed some of the controversy which has been generated by her Huffington Post article “Hip to Strip? Or Is It Time for Men to Stop Watching?”  Tarrant was initially ambivalent about the venue, but says, “I think the reading was a great opportunity to talk about women’s freedom to do sex work and to ask questions about why men pay for it, and I stand behind both topics.  The Hustler event still left the question of what do women get off on, but that’s a question for another day.”

The reading at Hustler provided Tarrant with a surprising opportunity to promote her latest book, Men and Feminism (Seal Press), which not only discusses the history of men in feminism, but also analyzes conversations about gender and masculinity while providing resources for men interested in feminist actions.  Tarrant is currently a professor in the Department of Women’s, Gender, and Sexuality Studies at California State University, Long Beach.  Her previous works include When Sex Became Gender (Routledge 2006) and Men Speak Out: Views on Gender, Sex, and Power (Routledge 2008), as well as articles in publications such as Bitch, off our backs, Women’s Studies Quarterly, The Huffington Post, and The Women’s Movement Today: An Encyclopedia of Third-Wave Feminism.  Men and Feminism serves as the sixth volume in the current Seal Studies series, a collection of academic primers which offers comprehensive coverage for students on gender and women’s studies.

In this interview, Tarrant discusses the origins of her new book, the intersection of masculine privilege in kyriarchy, and methods for men hoping to engage in feminist social activism:

In what ways did your work with the anthology Men Speak Out lead to the writing of Men and Feminism?

It gave me the foundation and the expertise to pitch the book to Seal Press.  It also gave me an awareness of the issues and a commitment to broadening the conversation about men and feminism.  It’s just fundamentally essentialist if we conflate feminism with women and it’s not strategically savvy in terms of a political movement.  We can do so much more when we have more allies and room for more voices.

What are some of the modern constraints men face when they attempt to identify or engage with the feminist movement?  How can feminists today work to overcome these barriers?

One constraint is that it doesn’t occur to men that they can be feminist.  It’s hard enough right now for women to identify with the feminist movement because of the political climate and the weird stereotypes associated with feminism, even when men and women are feminist-minded and committed to feminist equity and social justice issues.  A second constraint is that men might not think that they’re welcome and might not realize there are groups that are welcoming, whether they’re specifically men’s groups, mix-sexed or mix-gendered.  One of the things I hope Men and Feminism does is to publicize some of the groups out there that are doing amazing work because the book has contact information, websites, and resources for men’s feminist groups.

The more conversations we’re having with each other about these issues, the better, and that doesn’t always mean agreeing with each other.  Is there outreach that can be done?  Can existing groups make intentional room for the men who want to get involved?

Why do you feel it’s just as important for men engaging with feminism to consider multiple forms privilege in a kyriarchal lens rather than a patriarchal lens?

I think the term “patriarchy” has been a useful shorthand, and I don’t mean to suggest that patriarchy has gone away, but often it’s not so useful to explain power structures and hierarchy.  Masculine privilege is impacted by other forms of privilege: class, race, sexual orientation, and so it’s not really accurate to say that there’s always masculine privilege, and it’s also not the case to say that it’s a guy thing, something that only biological men do.  Patriarchy does describe a lot, but it doesn’t ring true for some of us and it doesn’t explain what we’re living in.  If we have a better word to describe power, domination and hierarchy that is beyond patriarchy to include other forms of unearned privilege, then I think that can really help move us forward.  It’s a way of reporting about gender and gender is not biologically driven, so we need to start de-coupling gender from sex.  Those two terms get confused a lot.

In the chapter “Gender Advantage,” you talk about how transgender and transsexual individuals have “a complicated relationship to masculine privilege” (pg 108).  Can you elaborate on this point?

The idea of having walked in two worlds and having the inside scoop can give transmen unique insights into gender and privilege. Transmen I spoke with for the book said they are sometimes accused of transitioning to gain masculine privilege. At the same time, anyone who’s trans risks a lot in our society in terms of privilege and sometimes in terms of basic safety. As a culture, I don’t know that we’ve worked out for a vocabulary for understanding sex, gender, privilege, and the distinctions and surrounding issues.

In the blog Womanist Musings, Renee frequently argues for the importance of considering social activism on the micro-level, which grants more people the opportunity to participate.  Throughout the book, you mention that “whether we choose to call ourselves feminist, pro-feminist, anti-sexist, or feminist allies, each of us can get involved in fighting sexism and all forms of discrimination.”  What are some micro-activist ways to approach these battles?

I think that’s a really good question.  I don’t want people to get hung-up on the names; conversations start and stop there.  Examples of micro-activism would be really being an engaged parent, taking full responsibility for engaging in domestic work because that work has been de-valued and segregated for so long.  Men who are dads can rethink saying, things like, “I’m baby-sitting.”  I mean, you don’t baby-sit your own kid!

I think not being a bystander is also a really crucial opportunity for micro-activism.  If we’re out with our friends, not being a bystander means not letting it go, laughing along, or colluding in racist, sexist or homophobic jokes.  It means refusing to be silent or complicit with these jokes.  You can use your own humour to speak up. Not being a silent bystander doesn’t have to involve major, in-your-face confrontations.

If you hear your neighbours in what sounds like violence, it’s okay to ask, “Do you need help?  Do you want me to call the police?  Are you okay?”  Even if the other person says, “No, I don’t need help,” it can be really powerful for them to know that somebody noticed.

Micro-activism can mean being aware of the privilege some men carry.  Men are so used to being entitled to speak and to believe that they’re right, to take up a lot of psychic space in the room.  I’m not saying men should shut up, but listening more and asking more questions could be a really profound form of micro-activism.

There are ways we can minimize gender stereotypes with kids without imposing our politics on them.  The idea is to meet kids where they’re at – if, for example, your niece really prefers purple sparkles, that’s great, encourage that creativity – but we don’t have to assume that a little girl’s interests end at purple sparkles. The same holds true for boys. The idea is to foster environments so that we all grow up having more options about how we live and how we express ourselves.  Still, it’s easier for us to give a little girl a baseball mitt than to give a boy purple sparkles.  We might also pay attention to how quickly we’ll pick a little girl up off the ground if she’s fallen down, while our tendency is sometimes to say to little boys, “Oh, you’re fine, what are you crying about?”  The reason it’s important is because it helps all of us expand our range – feeling hurt is not only a girl thing, and if our boys get hurt we don’t have to tell them to suck it up.

What projects are you currently working on?

I am working on recovering from Huffington Post (laughs).  I took some serious heat.  Because of the format, my name and photo are public and people can comment anonymously, so there’s this blog phenomenon where in this format, people just let it rip.  There were some thoughtful critiques, but there were plenty that were just vicious personalized attacks; there were people who kept redirecting the discussion rather than thoughtful engagement with the issues.  There were comments like, “Feminists are mad because they’re ugly and they’re jealous of the pretty strippers who can make money” or “Shira, why don’t you strip for me?  I can show you the pleasure of a bill tucked in your G-string.”  I read comments like that as an attempt to discredit what I’m really saying by diverting the focus and by trying to put me personally on the defensive by suggesting that I be objectified in that same way.

I am co-editing an anthology Fashion Talks: Undressing the Power of Style with Marjorie Jolles. This book highlights the tension between freedom of expression and control of the body.  I’m also working on a piece about gender literacy as civic literacy.  I’m continuing to do work about men, masculinity, feminism and bridging communities.  I’d like to facilitate conversation outside of our own circles.