Naughty Girls Give Birth In Public In Great Britain 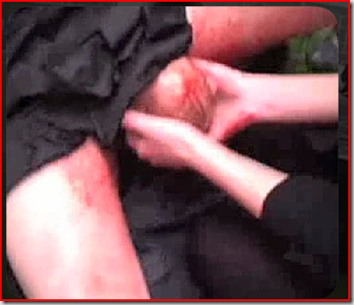 The graphic photo above is a clip from Great Britain's new National Health Service advertisement to prevent pregnancy.  (Click the image to view the video).  A young girl is filmed by camera phone lying on the ground screaming and writhing in pain as she gives birth in front of the entire campus. This is a neo-version of scared straight, except it deals with sexual activity instead of criminal activity.

This little video teaches young girls that should they engage in sexual activity, the punishment for their behaviour is a painful labour. It is very reminiscent of the punishment assigned Eve for giving Adam the apple in the garden of Eden.  The father is quite typically absent from this scenario mirroring the privileging of masculinity in our social discourse.  It is women that are constructed as “controlling” sex and therefore the abandonment of men of their parental obligations is rarely a subject that receives much discussion.  Note that this ad is supposed to serve as a warning against teenage sex and yet it is aimed solely at girls as though she became pregnant by herself.

Heaven forbid they hand out free condoms to kids which have the ability to fight both disease and reduce the chance of pregnancy. We simply cannot make young males responsible for putting on a rubber and understanding that they are  active participants in the act of sex and are therefore responsible for its outcome.  Clearly the NHS has decided to fall back on punishment as a form of “avoidance therapy” for young women.

This advertisement teaches young girls that pregnancy is a punishment rather than a natural outcome of sex, this further supporting the idea that unless conception occurs inside the patriarchal family it is a sign of lasciviousness whereas; a man is not stigmatized for participating in pre marital sex.  Though this ad is projected to teach kids to act responsibly when it comes to sex, it comes across as highly sexist in its determination to make women responsible and produce fear about a natural biological process.