Nude Photos of Rihanna and Prejean Which One Is The Slut? 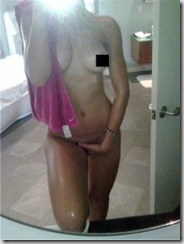 The above photos were taken for very different reasons but what they represent is a decision by two women to reveal their bodies.  Prejean posed for photos in an attempt to model for Victoria Secret and the alleged photo of Rihanna was meant to capture a private moment between two lovers.

When the photos of the now famous homophobic beauty queen were released, cries of hypocrisy and violation of contract were quick to surface.  Those running the Miss America pageant were blind to their own hypocrisy.  While it seemed evident to most socially conscious peoples that the real issue was who had the right to decide when her body was revealed, for officials it came down to morality.  It seems paying for breast augmentation surgery to enhance their investment in her was also not problematic.

Rihanna is the recent victim of a  domestic violence  incident allegedly perpetrated by her former boyfriend Chris Brown.  This incident has not  been adjudicated, however it has been tried in the court of public opinion with many engaging in victim blaming.   Even Rick Sanchez suggested that perhaps Brown deserved a break because of his tender age.

Since the moment  the above photos were released, both of these women have been slut shamed.  What separates them is that Prejean has been given a reprieve by Donald Trump who dutifully pronounced her a good girl deserving of a second chance.  It seems that male approval is all that is necessary to gain acceptance after breaking the “purity rules” assigned to women.

Rihanna has no such white knight in tarnished armour to rehabilitate her image. Just like Vanessa Williams, images of her nude body are being consumed without her consent and have been massed produced in every medium imaginable.   Though Chris Brown has denied releasing these photos, their appearance is quite serendipitous for him. In a society that bases the value of women on their sexual purity, these photos confirm in the mind of many that Rihanna is not an angel.

Two nude women; both slut shamed, however one has been reclaimed to do the good work of spreading her special hateful brand of morality with the world.  Of the two, clearly Rihanna should be the more sympathetic victim, after all it was her body that was beaten and assaulted, however the color of her skin works to ensure that she is considered tainted goods.

Rihanna’s body has come to symbolize many of the negative stereotypes associated with black womanhood.  When she was first assaulted by Chris Brown she was understood as the ever angry sapphire and with the release of the nude photos she became the much defiled Jezebel.   There are few rushing to her defence because these constructions uphold not only the black white binary but the crushing dominance that patriarchy has established over women.  Even the so-called defenders of women (read: white feminists) have been astonishingly quiet on this issue.

White female purity to some degree uplifts them and establishes a hierarchy in which the white woman is able to oppress based on racial privilege.  White women are well aware that to defend black women against race and gender based attacks means stepping down from their pedestals and admitting that we are equal.  Though we have both been subjected to the cruel attentions of patriarchy, since the introduction of Black womanhood to the western hemisphere, White womanhood is no longer defiled to the same degree.  The ultimate in disgust and exploitation is reserved solely for WOC.

When Black women are beaten, raped, or otherwise exploited we are not understood as victims because our bodies are understood to exist for the purposes of exploitation.  The world stands upon our shoulders and turns a blind eye to our cries of pain.

Prejean will move forward with her mission of spreading homophobia and bigotry across the country, whereas despite the terribly beating that Rihianna survived she will continue to be slut shamed and understood as “other”.  These photos are the stories of two women and what they reveal is that race privilege will always function to protect the body that it deems most valuable.