Should Poly People Wait Their Turn?

In the interest of full disclosure, I want to make it clear before beginning this post that I do not support the kind of polygamy practiced by the FLDS.  I believe their practice to be child abuse and harmful to all of the women and children involved. 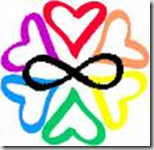 There are those that live in relationships in which three or more people are involved in a loving and equal partnership.  They share their lives both romantic and sexual, disturbing our construction of love as existing only between two people.  As someone in a committed heterosexual relationship, I will openly admit that this life is not something that I personally could engage in, however that does not mean that my discomfort should eliminate the right of another to love and live how they choose.

Polyamorous people are often constructed as  sexual perverts.  Images of sleazy seventies style swingers fill our heads without any thought as to how this construction simply privileges a form of relationship that we have chosen as the norm. The poly community has been very supportive of the push for gay marriage while at the same time seeking the same sort of legitimacy for their own relationships.  Once again we are finding that there are some people in the GLBT community that are all to willing to tell others to wait their turn as they see a push for poly rights as counter to the push for gay marriage.  If this sounds

familiar it should, because this is the same kind of argument that was thrown at the trans community when they were unceremoniously thrown out of ENDA legislation.  It seems that throwing people under the bus when it is convenient is an organizing strategy that is lovingly embraced (yes full snark) by some who are same gender loving.

Those in polyamorous relationships have the same concerns that gays and lesbians do.  There are issues regarding medical coverage, property division, the ability to visit hospitalized partners, as well as make medical decision, and inheritance rights.  To those involved in these relationships these issues are of paramount importance and if we believe that all expressions of love between consenting adults deserves recognition, then the inability of those in polyamorous relationships to have any protection under the law is indeed problematic.

The idea that one should wait for civil rights only exists to preserve privilege.  No one, regardless of their sexuality, race, creed etc should be forced to live a life wherein they are continually devalued.   Civil rights belong to all citizens and fear of losing ground on other issues means that we have simply succumbed to the idea that others should control the struggle for honouring all of humanity.  Jezebel recently posted on this very issue and the commentary was extremely revealing on the attitude of the immediacy of this concern.

The arguments presented against polyamorists are exactly the same as those used by the fundies to deny same gender loving the right to marry.  The cognitive dissonance on this thread is enough to make ones head explode.  Between wait your turn and it somehow does not seem morally correct, attempting to justify why others should not have the same rights as anyone else is wrong.  Whatever doubts I may have on how these relationships work, I know that my place is not in the private life of another.