So You Think You Can Dance: Homophobia In Ballroom Dancing

Well pigs are flying because I have to agree with Perez Hilton.  On May 21st the new season of So You Think You Can Dance premiered.   Over time  I have come to expect sexism to come floating out of Lythgoe’s mouth.  While he may critique the dancers for their failure, he never seems to miss an opportunity to be offensive.   Two men; one gay and the other straight auditioned for the show.  I was so excited to see the disturbance of traditional gender roles.

Though ballroom dancing is about artistic expression it is hard to escape the ways in which patriarchal values are routinely brought into to play to reflect not only herteronormativity but male headship.   The women are often in sexy attire perched upon torture devices (read: high heels) .  The men lead the women around the dance floor and are encouraged to present an aggressive and or dominant form of masculinity.   What’s not to love about heterosexism and patriarchy put to music?

The audition of Misha Belfer and Mitchel Kibel  was a delight to watch.  As the men moved across the floor taking turns leading, it was the perfect demonstration of the ways in which art can be used to disturb our social construction of gender and sexuality.  Good art pushes boundaries it does not simply repeat that which can be observed everyday in dominant social spheres.  It speaks to us on the most basic levels and causes us to question that which we take for granted. 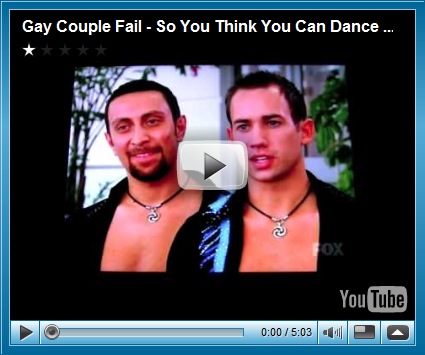 Lythgoe could not for one moment see the beauty and the challenge that these men were offering and instead resorted to homophobia.

“I think you probably alienate a lot of our audience.  I mean, we’ve always had the guys dance together on the show, but I’ve -- they’ve never really done it in each other’s arms before.”  Shortly thereafter, he added, “Do you know what? I’d like to see you both dancing with a girl. You never know you might enjoy that.”

Of course he wants to see them dancing with girls; that is what is “natural” right?  Mary who cannot think for herself echoed his sentiments. The poor little dear was confused. “"Who led the dance, she asked?"  The flip flopping of the lead was to much and she could not tell who was playing the “male and female” roll.   Heaven forbid we just do away with the idea that we need to stick to a gender binary in every single situation.

Lythgoe knew exactly what he was doing was homophobic and wrong.  He followed up his horrendous commentary on twitter:

“The same sex ballroom guys did remind me of 'Blades of Glory.' However, I'm not a fan of 'Brokeback' Ballroom.”

He’s not a fan of Brokeback Ballroom, well I’m not a fan of loud mouth windbags expressing their homophobia as though it is perfectly acceptable to display such bigotry. What these men did took courage in a world that everyday reifies heterosexualtiy and a male/female dichotomy as the norm.  They deserved applause and not ridicule.   It was no surprise that even once paired with women that they found themselves quickly ushered off the stage.

In support of Misha Belfer and Mitchel Kibel  please contact Fox entertainment and demand an apology.   These men certainly deserved better than what they received.

Labels: ballroom dancing, homophobia, Nigel Lythgoe, So you think you can dance