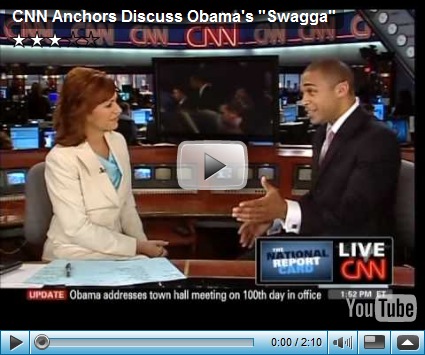 There is nothing better than playing mystical negro, except getting to play mystical negro on international television.  It is further harmful to be asked to play up the stereotype of the “cool black man” as though it is universal and not in the least bit harmful.

I love the whole meme that black men are cool and white men are not.  Black men are brothas that swagga, are down for the cause and white men can’t dance or jump. Blackness understood this way is nothing but the performance of a daily minstrel show to which whiteness supposedly wants inclusion to.  When it is about the fist bump, showing some love, taking it downtown, or hyper masculinity, blackness is acceptable unless of course a black man needs to hail a cab, get an education, or a job.

Blackness is something that whiteness can visit like an impromptu long weekend vacation, without any lasting stigmatizations.  Taking on  the accoutrement of “blackness” without any real attempt to understand the diversity of the black community or gain any real knowledge of black culture or history, is just one of the ways in which whiteness seeks to minimize us.

It is further problematic to expect that blacks should act as a tour guide for this limited cultural understanding .  Why is it that when whiteness professes a desire to learn, a “representative black” must step forward like some kind new age Tattoo from fantasy island? For Kyra Phillips this amounted to a dummies guide to blacks for television.  Knowledge is not pursued in the same manner as the quest to get a hamburger at a drivethru.

Since it became clear that Obama was a legitimate contender in the last US presidential race, the false fascination with blackness has gone into overdrive.  Many seek to hone their anti-racist credentials and believe that the ability to display cursory knowledge is enough to be understood as accepting and tolerant.  Saying I voted for Obama and therefore I cannot be racist has become the latest version of everyone's favourite, “I have a black friend.”  Fast, cheap and uncomplicated is how whiteness likes its race relations.

Unlike whiteness, blacks cannot afford to walk around in purposeful ignorance.  We have continually been subjected to violence and discrimination at the hands of whiteness and therefore learning to negotiate the ways in which whiteness wields power can be the difference between life and death.  Before you begin to think that this might be needless hyperbole, think about the black men and women that have died at the hands of the various police forces.  Think of the countless black women who have been raped.  Think of the children who have been purposefully undereducated and then tell me again why knowledge of whiteness is not a thing of importance in the life of a person of color.

Expecting people of colour to take you on a tour of our culture and our communities is not a commitment to learn.  Doing the fist bump does not make you cool or in touch with visible minorities; it simply means that you have learned a new form of greeting. Thinking that you can reduce blackness to a secret handshake, a new dance step and a single vote for Barack only proves how obtuse you really are.  Blackness is not something that you can retreat to when ever you feel like you need a staycation because visiting foreign countries has become to expensive in our current times. Standing on the outside and looking in with no attempt to learn is no different than visiting your local zoo waiting for feeding time for the animals.