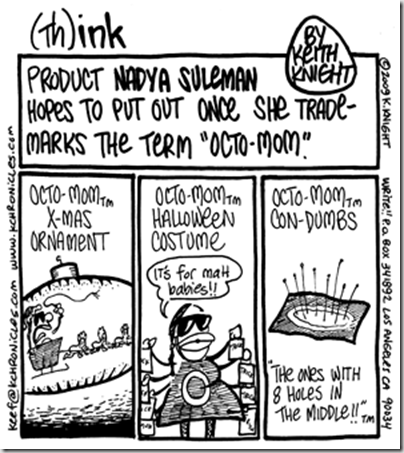 Where to  even begin with this nonsense.   I think of the three panels of this cartoon the one in the middle is by far the most disturbing for me.  It plays on the racialized stereotype of baby mama.  When the negative backlash first began many based their commentary on being forced to subsidize the raising of these children because Suleman clearly did not have enough income to financially support them.   Some went as far as to express disdain for the method of conception and declared multiple births or even large families as “unnatural.”

What is seldom discussed is the race of Ms. Suleman.  The reproduction of a woman of color has always been problematic unless whiteness could somehow benefit from it.   To this day there is much panic about so-called illegal South Americans invading the country and breeding like rabbits to ensure citizenship through their offspring.  That we are discussing children who are also human beings is irrelevant to right wing fundie movement.

Ms.Suleman is a Latina and though this fact has never specifically been brought into conversations, her body is just as racialized as any other woman of color.  The cartoon above clearly seeks to play on this aspect.  Note the large lips and the sunglasses.  The cartoon further relies on the construction that Latina women only reproduce in order to capitalize on their children.  It is never because they desire to become mothers are have a love of family, There is always some nefarious plot behind  their pregnancies that is not attributed to white women as readily.

When Jon and Kate had their 6 children after already being the parents of two there was no such backlash.  In fact, Kate continues to function as an idealized representation of motherhood.  Clearly they are capitalizing on their multiple births through book deals and their television show and yet we do not find this offensive.  Had they not made these arrangements the ability to raise 8 children would be a hardship for them.  Each time  they receive presents from viewers and free products from companies for the sake of promotion this further reifies the legitimacy of their family.

Kate made the same decision as Nadaya when she discovered that she was pregnant with multiple children and yet they are viewed entirely differently.  One has become a social pariah to be derided at every opportunity and the other is the perfect mommy.  A cartoon like the above would never have been made about Kate, we reserve such reduction for women of color.  With the coming change in racial majority projected as soon as 2050, whiteness has even more reason than ever to encourage the reproduction of white women and discipline and deny the reproduction of women of color.  Using covert racism as in this cartoon against  Suleman is just one of the various ways that she has been attacked, we just habitually refuse to acknowledge the role that race plays.

The above  cartoon is the work of Keith Knight of (K chronicle) and has been copied under free use.