One of the benefits of being White in Canada is having the ability to make a racist remark without apologizing.  You see, it does not matter what bodies of color think of your commentary, all that matters is your supposed ignorance or intent.

Conservative MP Pierre Poilievre, parliamentary secretary to the prime minister, used the term in response to Liberal Leader Michael Ignatieff's decision to back away from his predecessor's unpopular carbon tax policy.

"On that side of the House, they have the man who fathered the carbon tax, put it up for adoption to his predecessor and now wants a paternity test to prove the tar baby was never his in the first place," said Poilievre.

He used the term again later during question period.

He is not the first politician to feel that it is appropriate to use this term.  Tar baby can be used to refer to a situation from which it is difficult to extricate oneself from, however it is also commonly used racial slur against Black children.  Regardless of the context, the fact that the term has such a negative racial connotation makes it offensive coming out of the mouth of a White man.

Liberal MP Marlene Jennings, who is black, decried the term and demanded an apology.

"As a black child growing up, I was called all sorts of pejorative names based on the color of my skin, including the 'n-word' and 'tar baby' -- and believe me, it was hurtful," said Jennings.

"I am offended by Mr. Poilievre's insensitive remarks --and I know leaders in the black community across Canada feel the same way."

Once told that your commentary is offensive, a decent person apologizes.  This is especially true if the intent was not to offend or cause undue harm in the first place, however Poilievre has refused to issue an apology.  Intent does not remove the pain that was caused.

"I have worked hard to represent people of all backgrounds and I have always done so in a spirit of tolerance. My reference to the term 'tar baby' was a common reference that refers to issues that stick to one," he said.

So, people of color are to believe that he did not know of its racial connotations and embrace him because of a supposed display of previous tolerance.  I personally find it hard to believe that he was ignorant of the term.  Quite often Whiteness will push boundaries and then claim ignorance to explain away racist statements or behaviour.   One only need to examine watermelons on the White House lawn, to see the veracity of this statement. Intent when it comes to racism is irrelevant, what matters is whether or not your commentary is understood to be racist.

Over at the CBC we can found even further examples of the ways in which white privilege has blinded people. in the comment section for this story.

What is wrong with people who are sensitive about words or terms when there is nothing to be sensitive about.
Tar baby fits very well. There is nothing derogatory or racist about it. It's about perception. If you perceive it as poor taste, then you are too sensitive.
Maybe it isn't the best choice of words if you're in command of grammar, etiquette and ethics. But it is childish and a waste of time to dwell and make issue, especially to become a national news item.

Tar-Baby was a doll made of tar and turpentine, used to entrap Br'er Rabbit in the second of the Uncle Remus stories. The more that Br'er Rabbit fought the Tar-Baby, the more entangled he became. In contemporary usage, "tar baby" refers to any "sticky situation" that is only aggravated by additional contact. The only way to solve such a situation is by separation.
Those that find racism in its use are propagating racism where none was intended.

you people going on about it being racial, offensive etc......what's next? Hmmmm, how about we change the words and title of a Christmas classic to.."Pigmentally Deficient Christmas". Oh no wait, "Christmas" is offensive in itself. Change that too!!! Let's start there and see where it goes!!! LOL Too much!!!!

In the above we can see classic examples of white privilege.  First people of color are told that we are too sensitive and that the slur in question is not actually offensive.   Then Whiteness will attempt to educate us on our culture as though our lived experience is irrelevant.   Finally, as you can see with comment three, we are presented with a line of reasoning that is so fantastical it hardly stands as rationale thought.  You see, we are meant to accept our secondary status simply because it has always been customary to demean and marginalize POC. How dare we challenge the right of Whiteness to be offensive at will. 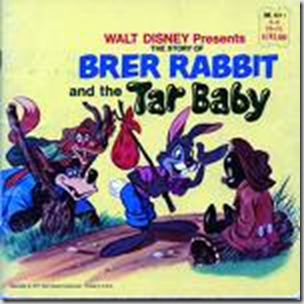 The above is the benign Brer Rabbit Tar Baby that has been deemed inoffensive. It plays upon all of the negative social stereotypes associated with a Black identity and yet somehow we are being too sensitive in demanding an apology.  No matter what context the term is used in, this is the image that comes to the minds of POC instantly.   Many will also report being called tar babies as children by white children learning how to express their racial privilege.  It is loaded with racism and pain for Blacks.

No white person has had to be attacked or demeaned in this way for the color of their skin and are therefore not in a position to decide if the above image or the terminology is offensive.  It is also in the best interest of Whiteness to deny a racialized context and thereby deny the humiliation and anger that it causes.  It is a conflict of interest to expect Whiteness to make an impartial decision when declaring a fault will lead to a label of racist.  By denying culpability it allows Whiteness to be the center of the conversation and thereby control what is and is not acceptable discourse.