Alright, I admit I am not a fan of Tyra Banks.  I take issue with the exploitative way in which she covers many issues.  When this is combined with the fact that she claims ally status and regularly makes problematic statements without apology, she stands as a bad example of what an ally should represent. 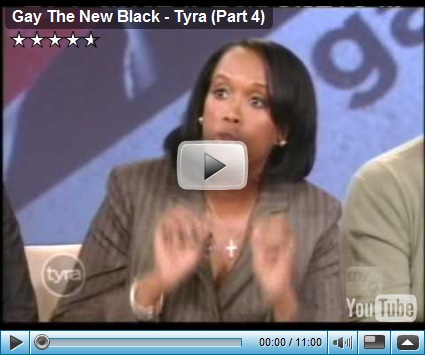 The above video is the fourth segment from Gay The New Black  To have an open conversation she invited gay rights activists along with right wing fundies.  The following are some of the choice comments:

Sandy Rios: “You can stop being gay, you cannot stop being black.  As a fully heterosexual female, I can tell you how difficult it is not to have sex to.  [Celibacy] is the answer as opposed to acting out on homosexuality or adultery or paedophilia.  Gay is broken hearts, it’s disease and it’s unnatural.”.

The above are just a small snippet of the homophobic commentary said on that show.  After all of this one would believe that a true LGBT ally would strongly declare that this was wrong.

Tyra:  “I do respect everybody for their beliefs .  I respect this side,  I respect this side, everybody is entitled to their opinion.  One thing that is important to me is realizing pain in a human being and whatever you believe whether you don;t approve of how somebody lives their life to me what hurts is the lack of empathy for pain.”

Nothing can be learned from listening to the right wing fundies that she decided to give space to preach their hatred.  This kind of inflammatory hate speech is a part of our everyday conversations.  From using the term “faggot” to gay bashing, homophobia is part of our everyday discourse and religion is often used as a justification as was clearly displayed in this segment.   The main issue with this segment is that despite all of the hatred and vitriol, Tyra a supposed gay rights ally stood on national television and announced that she “respects everybody for their beliefs”   What is there to respect about homophobic commentary that we know supports heteronormativity and our dissonance in worth and value?

What she casually brushes off as an “opinion,” is hatred.   Were this to be aimed at a different subject or category of people, would she have been so wilfully obtuse as to the potential to cause harm?   When one decides to take on the label of ally, it behoves you to speak forcefully against the kind of hatred that was displayed on her show.  There is no room for middle ground or pacifying people in their supposed beliefs.  You either believe without doubt that homophobia is wrong or you don’t.

Tyra has repeatedly made this mistake when it comes to the GLBT community.  Can you imagine someone like Oprah, allowing these people to sit on her stage and denigrate gays and lesbians like this without any form of commentary?  While it may be next to impossible to change the mind of those that are determined to maintain their heterosexual privilege, it is still necessary to declare unequivocally that such commentary is counter to a free state and recognizing the humanity of all peoples.  There are several issues in life that may fall under gray areas, however deciding that all people matter certainly does not qualify as an issue that one can equivocate about.