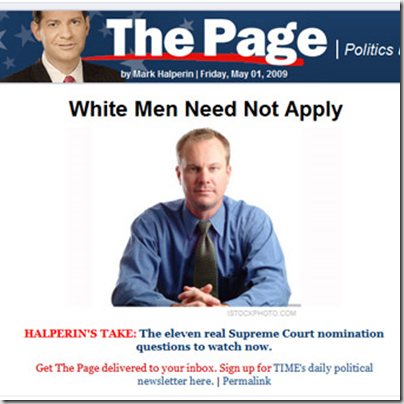 You simply cannot make this shit up.  Marc Halpern is concerned that with the retirement of Souter that the white man will experience discrimination. I wonder if he bothered to glance about the current make up of the supreme court and realize that not only is whiteness represented, it is over represented?  The white male is the most privileged group in history and yet the mere thought that they might just loose one seat is enough to push the panic alarm.

While I am not suggesting that affirmative action will be used in the selection process, it damn well should be.  Clearly when we leave the government up to its own devices it is more than content to follow the historical pattern of making sure that women and POC are barely represented.  Personally, I would love to see a WOC put on the robe.  When laws are made without the influence of all members of society it means that certain people will always face discrimination within a system that is supposed to be race, class, and gender blind.

White men find the thought of affirmative action threatening because it seeks to specifically undo the generations of work that they have invested in ensuring that we live in a society that is inherently unequal.   This panic is the acknowledgement that the undeserved privilege by which they live is not natural; rather it is the collection of purposeful acts daily engaged in by whiteness.

In this instance selectively eliminating a white male from competition is not discrimination, it is an attempt to balance books that are deep in the red.   While whiteness may feel entitled after having the ability to express power freely for generations; the ones entitled to a little justice in this world are women and POC who have systemically been shut out of opportunities.

Each time whiteness presents an objection to the slightest possibility that a marginalized body might possibly achieve a new position of power there is also a shadow of apprehension.  I remember one woman at a Palin campaign expressing fear that Obama “might not like white people”.   You see, what is often unspoken of is a fear of retribution.   Yes the “R” word.  When you know that you have wronged someone repeatedly, you expect vengeance.  Whiteness is more than aware of the ways in which it has attacked, demeaned, murdered, assaulted, and abused people of color.   Though it often tries to construct our anger as needless emotionalism; it fears a loss of privilege will not only result in equalization but justice.  This is why the turn the other cheek POC is so highly valued.

When we appear happy or content with the imbalance in justice it affirms their right to lead as natural and reassures them that the continuation of oppression is acceptable.   Unfortunately for whiteness the days of sambo happily smiling and dancing a jig are long since over.  While I have no desire to recreate slavery or place whiteness in Jim crow living situations. my understanding of justice involves equality for all people.   If it means that some feelings get hurt because the opportunity to express power is reduced, somehow I will sleep at night.

Final word to the wise: Considering that 2050 is fast approaching you might want to keep some of those affirmative action laws on the books for when you might actually need them – [email protected] TransGriot.

H/T Alas A Blog and Shakesville