Another Trans Woman Joins the Remembering Our Dead List

I really look forward to the day when we are no longer forced to keep lists like Remembering Our Dead.  I look forward to the time when no one is killed simply for daring to be trans gendered in a world that has decided to privielge cisgendered bodies. 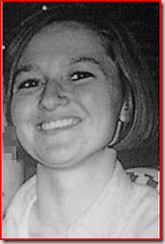 Her name was Kamilla and was murdered by her boyfriend of two years after he discovered that she was a trans woman.  After a quick romance in St. Petersburg the two moved in together and began to share their lives.  When Vladimir suggested marriage Kamilla turned him down causing him to believe that perhaps there was another man in her life.

After searching her mail he discovered a letter addressed to her former name.  Upon further research he learned that she had gone to Australia to have SRS surgery.  Apparently he was so upset by this discovery that he shot her dead.   He then attempted to slit his wrists.  In a note he left behind he suggested that his devastation over her “betrayal” was what precipitated the violence.

Yep, nice way to blame the victim for his actions.  Vladimir of course survived his supposed his suicide attempts while we are left to mourn for the loss of another trans woman whose life was so needlessly brought to an end.

When I look at her picture I see a very happy woman with much to offer the world and it is a travesty that Vladimir’s hatred brought an end to her young life. Living as trans women in this world means that one is subject to high levels of violence.  Even in societies that are supposedly open and tolerant a situation can escalate quickly leading to either violence or murder.  Their identities are continually under attack as they are constructed as “things” or “its”, instead of real flesh and blood people.

There will be those that feel that Kamilla is in part responsible for her death because she did not publicly declare her trans status however it is my position that what she did was not dishonest.  Trans women are women from birth; they simply have the misfortune of being born in the wrong body.  When she shared her live with Vladimir it was as a woman and it is my hope that she will be remembered as such.

Vladimir was not without options when he discovered her so-called deception. He simply decided that her life was not valuable because we have over valued cisgendered bodies.  Until we reach a time when we uniformly decide that all bodies are valuable regardless of gender status, trans women will continue to live lives fraught with peril.  Rest in Peace Kamilla, may you find the understanding and empathy in death that was denied you in life.

(source: the language in the linked to article is extremely transphobic)