Apology For Jim Crow and Slavery but no Reparations

The original sin of the United States is undoubtedly slavery.  The legacy of the African American holocaust still continues to have reverberations throughout the entire Diaspora.   We have been disconnected from our culture and heritage all to benefit Whiteness.   Can an apology ever be enough?

According to CNN the resolution states:

The vestiges of Jim Crow continue to this day.African-Americans continue to suffer from the consequences of slavery and Jim Crow -- long after both systems were formally abolished -- through enormous damage and loss, both tangible and intangible, including the loss of human dignity and liberty, the frustration of careers and professional lives, and the long-term loss of income and opportunity.

The government can acknowledge that African Americans paid a huge price for slavery, however a serious attempt to rectify the damage is deemed unnecessary.  There are those that believe that we have reached a post racial society and therefore in this supposed state of equality there is no need for African Americans to receive “special benefits”.   This line of thought ignores the fact that the inability to transfer wealth through generations means that  Blacks are already arriving at the starting line long after the race has begun. 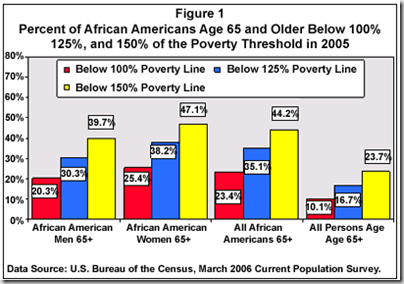 Not being saddled with a student loans or having your family pool its resources to place a deposit on a house can mean success and a life of comfort.  Though we do not like to think of the death of our loved ones, the transfer of wealth through inheritance is large factor in how wealth is attained.  With the path to accumulation of land and fair wage paying jobs blocked for many African Americans, this has meant generation after generation of poverty.

By refusing to offer some form of restitution, the government is unequivocally stating that it is fine with the continued impoverishment of African Americans. The majority of wealth is firmly ensconced in white hands and this is not because they have worked any harder, or are possessed of greater intelligence; it is simply the result of a system designed to ensure the hegemony of whiteness.

This debt could be repaid by subsidising Black owned and operated businesses, it could be used to pay for college/university educations, or even by making it more feasible for African Americans to own homes (the largest financial purchase that most will make in their lifetimes), however  the cost is often deemed to be to great or unnecessary.

A white run congress can decree that the costs are prohibitive given that it is not their young men that are languishing in prisons.  It is not the sons and daughters of congresswomen and men that are purposefully being undereducated in dilapidated buildings. 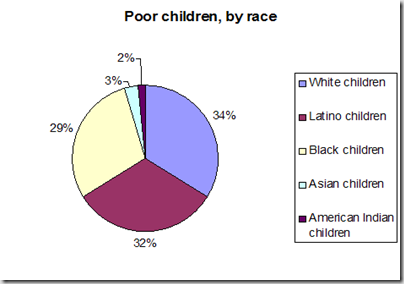 Considering that Black children are in the minority the fact that they make up 29% of impoverished children is alarming.  Please take note that in the above graph, all people of color over represented in relation to the percentage of the population that they make up.

Slavery and Jim Crow may no longer be institutionalized by law, but they continue to have real world presence.  One cannot even reasonably argue that segregation is a shame of the past when an African American can be pulled over for driving while black in the “wrong neighbourhood,” or followed around stores.  It is not cynical to state that Blacks encounter great barriers to success, it is simply being a realist.

It is not a matter that the facts are questionable, it is a matter that African Americans are still so socially devalued that they do not matter to the largely white run government.  If the crime rate, or drug rate that happens in inner cities were occurring in the largely white suburbs some sort of intervention would long ago have happened.

Children born into these neighbourhoods are not predisposed to criminal behaviour, however a lack of opportunities coupled with crippling limitations of poverty mean that by third grade many have already been stripped of their childhood and are well on the way to a life of struggle and or imprisonment.

Reparations will not solve all of the problems that the Black community must deal with, however they will be a progressive step in the right direction.  All of the money in the world will be meaningless unless combined by with an effort on behalf of whiteness to confront the privilege in which it continues to live on the backs of people of color.  To continue to deny that a comprehensive effort needs to be made is just one of the ways in which whiteness continues to institutionalize its benefits.