Black and Blowing Mom A Kiss Means No Diploma 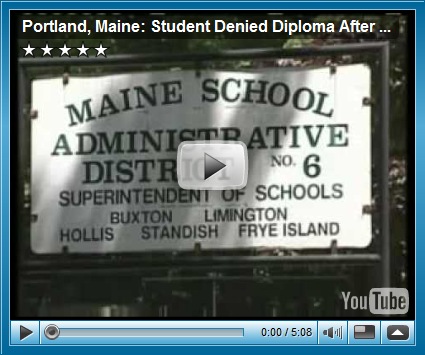 Since the day of Emancipation Blacks have sought education because it is the surest path out of poverty.  From outdated textbooks, to poorly equipped schools, African Americans have fought racism in an attempt to ensure a better future for their children.

Even as we claim that all is equal between the races, a simple trip to an urban school followed by a trip to a school located in a lily white suburb will reveal whose future society has decided to invest in.  The more education that a person receives the less likely they are to live a life of poverty or spend any time in prison.

Black males face a myriad of negative social descriptors which they must daily wage war against.  From the earliest of ages black males are constructed as aggressive to the point of violent, socially inept and incapable of learning.  Is it any wonder that when a child beats the odds and not only graduates from high school but gets accepted to college that it is a moment of euphoria?

Justin Denney stood up, took a bow and blew his mother a kiss, when his name was called at his graduation ceremony and for this he was denied his diploma.  In what world can this behaviour be considered “showboating”, or causing an unnecessary distraction?

It is my belief that the decision to withhold Denney’s diploma has more to do with the color of his skin than his actual behaviour. What would have been seen as natural exuberance on the part of a white male, is grounds for discipline when performed by a black male.   Socially we routinely attempt to stifle black masculinity because it is understood as forever childlike and combustible.  Unless such behaviour is seen as exploitable e.g. sports it is carefully controlled.

Denny was reminded that even that which we work for can be quickly taken from us at the will of structural forces. Education is as much about upholding social norms as it is passing specific skill sets to certain bodies. At his graduation Denny was granted one last lesson by Bonny Eagle High School; never forget that you are black and success is  at the whim of whiteness.