This is a guest post by Holly Ord of Menstrual Poetry. 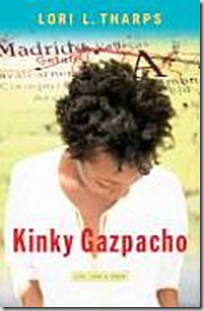 Lori Tharps grew up in the white suburbs of Milwaukee, Wisconsin, went to private school, attended a prestigious college, and continuously never felt a sense of belonging among her own people and a part of her own culture.  While her life may not be too unlike the lives led by thousands of other American people, her accomplishments and her journey through life makes for an intriguing and captivating memoir.

Tharps' memoir starts off when she is in the third grade, listening to her teacher tell the class about an International Day bazaar where the students would be participating by sharing their cultures in the form of food, games, decorations, and dress reflecting their native countries.  Being the only black girl in her class and one of only a handful in her entire private school, the prospect of International Day weighed on her mind and brought her to the conclusion that on that day, her classmates would realize that she was different than they were; that she was less than them  Deciding not to attend school in costume that day because she did not want to attend school dressed as a slave, she went throughout the day in a panic, hoping that no one would ask her why she was not dressed in a costume reflecting her heritage.  Throughout the following school years of Tharps' life, similar thoughts and memories arise very much like her third grade International Day bazaar.  She was raised in a privileged household and attended private school and for a fraction of one particular school year when she was nudged into the public school system, Tharps was received as a snob who was trying to "act white" by the other black girls she had wanted to fit in with, was ostracized by other black young women during her college years, and that was just the beginning of the racial dilemmas she would encounter throughout her life.

From a young age, Tharps became infatuated with Spain; knowing that Spain was her destiny and that she would someday live there.  While in college, she traveled to Morocco with the American Field Service, but later studied abroad in Spain, where she came face to face with the culture she never knew Spain to have.  She notices that a great deal of products, such as something as simple as a chocolate bar, has racist connotations, but when she brings them to the attention of Spanish natives, they are quick to declare that Spain is not a racist place.  But after falling in love with a Spaniard, getting married, and having children, she spends a great deal of time traveling to Spain and her memoir becomes a detective story on how Spain had been involved in slavery.  Throughout her life in Spain, Lori Tharps had searched for where the kinky mixed with the gazpacho.

I absolutely loved this memoir; it was a simple and lightweight read that packed a punch of reality that is undeniable.  I devoured her memoir in utter anticipation of what her next move in life would be and was overjoyed over her boldness and determination to uncover a black past in a country where most of its citizen were unaware of the world that had come before and still revolved around them.  The only flaw with the book is that it leaves you wanting to know and experience more of her life and general thoughts.  Kinky Gazpacho will bring you on a journey that is so much more than merely a life led by a woman who dares to open her mouth and question her surroundings.