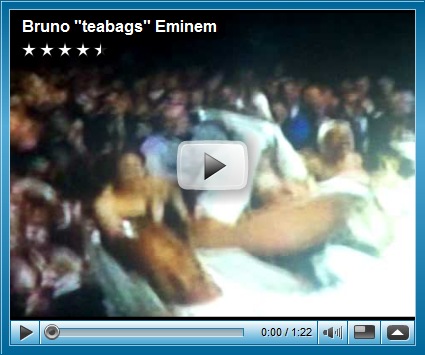 Sacha Baron Cohen, in the character of Bruno thought it would be hilarious to teabag Eminem.  One can surmise that this was done specifically to point out the rampant homophobia in which Eminem knowingly engages in, in his rap lyrics however how does a straight man “playing gay” really prove this point. As Liss at shakesville aptly points out, for the character of Bruno to be understood as gay he must depend upon all of the social constructions that have been applied to a gay male identity thereby reaffirming difference between heterosexuality and homosexuality.

Liss states, “The rationale also goes back to the ostensible raison d'être for the Bruno character, which is exploiting people's homophobia and holding it out for ridicule—a dubious proposition given that Baron-Cohen is not himself gay, thus allowing homophobes the opportunity to laugh unironically at the gay stereotype being played by a straight man.

Publicly assaulting Eminem in this way does not challenge the gay/straight binary or present any opposition to homophobia.

What is shocking about this video is that Cohen is using Eminem’s known homophobia to justify sexually assaulting him.  Let’s imagine that Eminem was a woman can you imagine this same crowd laughing because a man stuck his genitalia in her face?  I think at the very least there would be expressions of shock if not outright anger and yet when it happens to Eminem, it is a laughing matter.

As he sat there with an  incredulous look on his face he asked,“are you fucking serious?” the horror on his face was palatable.  Bruno crossed the line by placing his genitalia in Eminem's face.  Sexual assault can never be reduced to some sort of comedic routine or as punishment for behaviour.  You see this meme routinely played out in scenarios wherein prison rape is suggested as an appropriate punishment for violating social laws.  These use sexual assault in an “ironic way”, only serves to support the idea that violating another is acceptable.

Eminem did not learn “a lesson” by being publicly humiliated; if anything Cohen’s actions only served to further his homophobia.  It publicly cemented in the minds of those that have irrational fears of gay men that they are justified in fearing attack.  This “comedic routine” was an epic failure and those sitting in the audience laughing really need to stop and pause and consider why they felt the humiliation and assault of another human being served as fodder for entertainment.